Why can't we just enjoy the show? 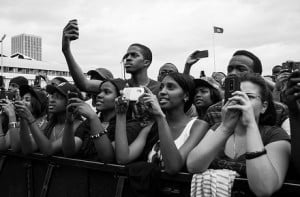 Rock demigod Jack White recently left the stage unexpectedly early to the disdain of a New York City audience. No official reason has been given, but at the beginning of the show he had asked audiences to refrain from filming.

To ask this of an audience in 2012 is akin to asking them to refrain from using Facebook for a month. In all likelihood, the audience ignored that rare but understandable request and White was angered by their disobedience.

Either way, the smartphone is an now unavoidable vexation at virtually any major concert. The more prolific the song, the higher number of people reach for their phones to film the experience, rather than jump up and down like wild animals.

When did concert-goers become incapable of existing in the moment?

Who is so important that, rather than enjoy a band’s signature hit by waving one’s hands back and forth, one is instead carefully maneuvering their phone to capture the best possible angle?

It has come to a point where we feel the need for our experiences to be validated through film. No longer can we just share a story orally and feel fulfilled by that. No, we must convey our experiences to friends and family by posting some twisted technological badge of honour on social media.

Concert-goers now routinely sacrifice their own personal enjoyment in favour of the gratification felt from later social media acceptance. To post a performance of Jack White on YouTube somehow now trumps the memory of actually having seen him play live.

The behaviour has made watching live performances on Jimmy Kimmel Live or televised festivals borderline unbearable. Rather than witnessing a massive mosh pit or a crowd roaring in unison, one is instead treated to an endless field of smartphones zoomed in on the performance. This despite the fact that the concert is being broadcast in high definition across the continent.

Such a robotic approach to concerts must be rather uninspiring for musicians like Jack White to have to deal with. Rarely can a modern artist even peer into the eyes of a fans anymore, because fans’ eyes are now impeded by a new, bright, but lifeless set of eyes: glaring smart phone cameras.

Séamus Smyth is a student at SAIT in Calgary. This originally appeared in The Weal.