Smokers at Alberta pushed too far 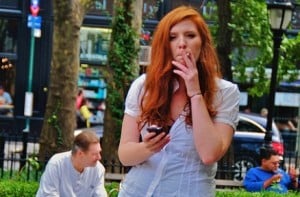 Every student has some way of relieving stress during final exams. Just imagine for a moment that your relaxation method is suddenly prohibited.

That is the dilemma now faced by smokers at the University of Alberta if a new policy introduced by a select group of University of Alberta Students’ Union councillors goes ahead (it has already passed the first reading). The policy would restrict on-campus smoking to remote areas of university property called “health promoting areas.”

This would leave students who want to engage in an unhealthy—but perfectly legal vice—marginalized on their own campus.

Smoking at U of A is already restricted to areas away from all entrances to buildings and on-campus residences, air intakes, and athletic fields, according to Tobacco Free Campus. That means that tobacco-hating students and staff are already able to avoid smokers en route to classes.

But many want even harsher restrictions like those at other schools. The University of Calgary has harsh rules already in effect, the Marine Institute of Memorial University of Newfoundland has been smoke-free for one school year and Dalhousie University has had a campus ban since 2003.

It’s no secret that smoking is highly addictive and that it’s difficult for individuals to quit. That’s one reason, according to Health Canada, that 17 per cent of Canadian citizens still describe themselves as frequent smokers. Although this is a rather low percentage, and is continually decreasing, it suggests smokers are still a fairly large minority group within the student body and staff.

While tobacco restrictions in certain areas make sense, and help protect the rights of students who don’t wish to be exposed to second-hand smoke, smokers should have some rights too. A near-ban on campus would restrict the rights of a large minority. The current restrictions go far enough.