So much for the 'People of Einstein' myth 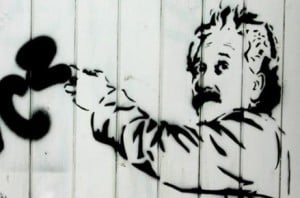 By Emma Teitel. Republished from Macleans.ca.

There’s an inside Yiddish expression used by Jews to describe other Jews behaving badly in the public sphere: “shanda for the goyim” — shanda meaning “shame” and goyim denoting “gentiles” (non-Jews). The phrase is most commonly employed by Semitic seniors, when the modern media informs them that Jews can in fact be lechers (Dominique Strauss-Kahn), alcoholics (Amy Winehouse); unsuspecting nudes (Scarlett Johansson); and now, thanks to one 22-year-old Toronto Jewish girl, dangerously obtuse.

The woman in question—with whom I share at least one mutual Facebook friend (I am also a 22-year-old Jewish girl and it’s very possible we crossed paths, maybe at B’nai Brith summer camp, or perhaps in the annual United Synagogue Youth Limousine Sukka Hop)—is a York University senior named Sarah Grunfeld, who last week made shanda-esque headlines when she put her social science professor’s career in jeopardy over an anti-Semitic remark that turned out to be—well—not. The statement “All Jews should be sterilized,” Professor Cameron Johnston explained in the introductory lecture to his class, was an example of an invalid and dangerous opinion; his point was that in academia especially, opinions must be reasonably qualified. Grunfeld failed to catch that qualifier, though, perhaps because before the prof had a chance to offer it, she had stormed out of class and enlisted the on-campus Israel-advocacy group, Hasbara (Hebrew for “Explanation”), to call for his immediate resignation.

Word of Johnston’s so-called racism exploded virally online by way of what National Post columnist Jonathan Kay has dubbed the “Bubbie-net” (Jewish grandparents frantically emailing their kin with fresh findings of alleged anti-Semitism); at the same time widely-respected Canadian Jewish civil rights association, B’nai Brith (Children of the Covenant), leaped in with equal gusto to champion Grunfeld’s claim. Then came the big reveal: Ms. Grunfeld had made a mistake. Not only was professor Johnston not an anti-Semite, he was a Jew. To borrow a more accessible Yiddish phrase, political correctness at York University had effectively schtupped itself. Not to mention Sarah Grunfeld.

The maligned university student has since “qualified” her accusations against Johnston with claims twice as ludicrous as the original. “The words, ‘Jews should be sterilized’,” she told the Toronto Star recently, “still came out of his mouth, so regardless of the context I still think that’s pretty serious.”

A lot of Canadian Jews are embarrassed and ashamed by this kind of doublespeak, and so was I, until I re-examined the root of my disquiet. There’s a reason why this particular shanda—and not, let’s say, Woody Allen’s marriage to his adopted daughter, or Garth Drabinsky’s defrauding of his shareholders, or The Daily Show’s Jon Stewart’s changing his name from John Stewart Liebowitz—ignites such fierce indignation in the Jewish community: Because Grunfeld doesn’t simply make us look bad (like the guys above); she makes us look stupid, and in doing so debunks the cultural stereotypes of intellectual superiority that we sometimes not-so-secretly enjoy.

Jewish American author Michael Chabon explored the seductiveness of this stereotype to Jews themselves in the New York Times last year in considering the calibre of the discussion following Israel’s botched raid of the Gaza bound Turkish flotilla, Mavi Marmara, in which nine activists died at the hands of Jewish soldiers (a debacle Diaspora Jews had trouble reconciling with our supposed “cultural” cleverness):

“I would look around the Passover table, say, at the members of my family, and remark on the presence of a number of highly intelligent, quick-witted, shrewd, well-educated people filled to bursting with information, explanations and opinions on a diverse range of topics. In my tractable and vainglorious eagerness to confirm the People of Einstein theory, my gaze would skip right over—God love them—any counterexamples present at that year’s Seder.”

Sarah Grunfeld—God love her—is one such counterexample. But we’d be wrong to let our gaze skip right over her, because there’s another, more disturbing lesson to be drawn from the Grunfeld affair and it’s this: as Jews, we hold the moral high ground to call out anti-Semitism. That’s why, in part, Grunfeld’s accusation had the legs it did, and why, perhaps, it got the backing from the Jewish infrastructure organizations such as B’nai Brith, which still hasn’t distanced itself from Grunfeld or denounced her fallacious claim, but has instead published her unapologetic letter blasting Professor Johnston for a sin he didn’t commit, with a logic even more addled than before. And there lies the biggest shanda of all: Grunfeld’s false allegations and the group’s uninformed decision to support her are bad mistakes, but both parties’ inability to own up to those mistakes renders them inexcusable. Because when we cry wolf —especially on one of our own—serious apologies are in order.

But it’s doubtful that apologies of any kind will be made, and B’nai Brith will continue sniffing out anti-Semitism where there may not be any, all the while undermining cases where there is. If anything good does come from this debacle, however, it’s that our enemies and unsolicited friends (Glenn Beck comes to mind) may think twice before attributing all things grave and glorious to the “People of Einstein.” Because if public representatives of the Jewish faith continue to make exceedingly stupid mistakes, then the various calumnies the conspiracy theorists like to heap on all of us—the blood libel, the plague, AIDS, the Iraq War, and our obvious plans to take over everything from Saturday night TV to the World Bank—start to ring kind of hollow. After all, with Sarah Grunfeld leading the way, for what exactly can they blame us?