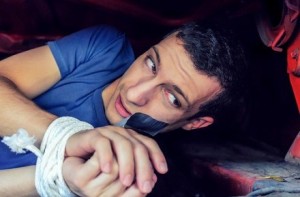 The apparent hate crimes prompted hundreds to rally against in support of their fellow student.

They also prompted a police surveillance camera which caught the supposed victim slipping hateful notes under her own door. Not too bright, Pennell.

She faces eight counts of tampering with physical evidence, plus charges of interfering with police, making a false statement to police, and reporting a false incident, reports NBC. She’s now banned from state universities for five years.

At least she can take solace in the fact that she’s not the only university student to have a silly hoax uncovered this week. A student in Brazil is charged after faking her own kidnapping. She told police it was an attempt to excuse herself for not handing in a year-end university project, reports CBS.