Quebec premier says confrontations are "behind us" 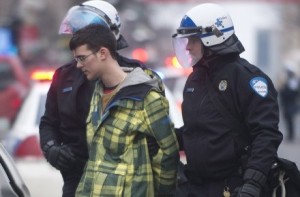 Without the salvos of snowballs pelting police, the chunks of ice flying through the air, and the officers chasing protesters across a snowy plaza, this could easily have been a scene lifted from the “Maple Spring.”

The clash in downtown Montreal was a mid-winter twist on the student demonstrations that shook the city on a near-daily basis last spring and summer.

Thousands of people marched through the streets Tuesday in a protest that coincided with the end of Quebec’s summit on higher education.

This time, protesters were venting at a different government.

The two-day summit saw the newly elected Parti Quebecois announce three-per-cent-a-year tuition hikes. The PQ’s new fees are significantly lower than the ones proposed by the previous Liberal government — about one-fifth as much.

Premier Pauline Marois had left the conference feeling confident enough to declare that Quebec’s era of social unrest was over.

“We have succeeded in putting the confrontations behind us,” Marois said in the closing address of a Montreal summit that assembled students’ associations, university leaders, unions and social groups.

“The social crisis is behind us.”

A few hours later, signs of the familiar tumult re-emerged.

On the other side of town, armoured police confronted projectile-throwing protesters in a sequel to the clashes that drew international attention last year.

The demonstration blocked streets, altered bus routes and saw police drag some marchers out of the crowds in order to arrest them.

The skirmishes led to 13 arrests, mostly for unlawful assembly and assault with a weapon. Two of those arrested were carrying Molotov cocktails, police said.

The police department said one officer was injured.

Last year, Quebec’s first student strikes of began in mid-February and they grew into a social movement that saw nightly street marches.

At issue was the $1,625 tuition increase over five years planned by the previous Liberal government.

The PQ cancelled the Liberals’ hikes after it won power in September and this week it announced scaled-down increases of its own. Its proposed hike will raise tuition by one-fifth of the Liberal plan — $70 per year, or roughly $350 after the first five years.

Earlier in the day, Marois had conceded that her small tuition hikes wouldn’t please everyone — not the student groups, nor the university administrators who said they needed more cash.

“We had some difficulties (finding a consensus) with the tuition, but the responsibility of the government is to decide — and I decided,” Marois told reporters after the summit.

Even the more moderate student groups, who participated in the summit, called the three-per-cent annual increases unacceptable.

They had requested an absolute freeze on tuition. Instead, they got what some of them called a perpetual tuition hike.

“We’re really disappointed about the fact the tuition fees are going up,” said Martine Desjardins, president of Quebec’s largest student federation, who attended the summit.

She said she had hoped the government would have debated the issue further.

But students, Desjardins added, did not leave the summit empty-handed. She credited the government with providing some extra funds for the financial-aid program and establishing a committee to examine mandatory student fees.

Student leaders will now consult their members about the next step.

The march Tuesday in Montreal, meanwhile, was the first of more student protests expected in the province. The movement is planning to stage nightly demonstrations starting next week.

It’s not yet clear how many student groups, and protesters, will participate in the demonstrations.

Thousands hit the streets Tuesday in a march organized by ASSE, one of Quebec’s more-radical student federations.

The group boycotted the education summit and has long demanded free university tuition.

“We will keep coming back to remind the government that the summit was not what we expected and that a tuition hike will not pass.”

He predicted that it would take time, however, for the movement to gain steam again.

While his group said 50,000 students agreed to a one-day strike Tuesday, those at some schools with a reputation for militancy actually voted to stay in class.

Inside the tight security bubble that shielded the summit, students weren’t the only ones who disagreed with the PQ government’s plans for the education system.

Some university administrators left the long-awaited event with deep concerns their schools are at risk of under-funding, due to a cut in their budgets by $125 million in 2012-13 and again in 2013-14.

“The university system remains anaemic and it will be bled of $250 million in the coming years,” Universite de Montreal rector Guy Breton told the summit.

Breton warned of a looming crisis that could imperil some university programs — including medicine — unless the government increases university funding.

“The patient is far from being in good health — I guarantee that,” he said.

Others saw the PQ government’s indexed tuition increases as too small, a plan that would pile more burden on taxpayers who didn’t go to university.

“You’ve obtained an artificial consensus… in this room where the vast majority is excluded,” said interim Liberal leader Jean-Marc Fournier, who then pointed to the challenges of lower-earning Quebecers.

“You’re asking (students) to pay a little less, someone else will pay instead.”

In an abrupt reversal of roles compared to 2012, it was the PQ government dealing with uproar in the streets.

While she was Opposition leader, Marois wore the student movement’s signature red square in the national assembly and even took part in a pot-banging protest that became commonplace in the province.

One marcher held up a sign Tuesday that read: “Pauline, where’s your casserole (pot)?”

During the closing news conference of the summit, Marois was asked about her declaration that social harmony had been restored.

“I’m very at ease telling you that the divisions are now behind us,” she said.