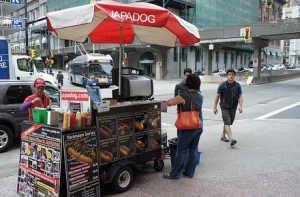 Vancouver has a burgeoning street food scene, but students from the University of British Columbia will still need to travel off campus to experience it, at least in the foreseeable future.

Andrew Parr, the University of British Columbia’s head of food services, told The Province newspaper that he’s skeptical about whether food trucks and carts will ever be allowed on campus. That’s because union that represents food workers, CUPE 116, is opposed.

After Vancouver’s famous Japadog carts showed up at UBC in November, the union filed a grievance and the carts are no longer allowed.