Student has heart attack during exam 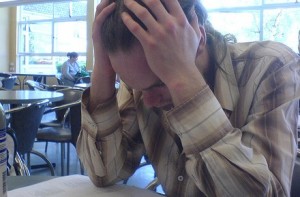 Jairaj Chandran, 18, was 10 minutes into his high school theology exam in Cambridge, U.K. when he felt his chest getting tight and he started to having trouble breathing. He asked to step outside.

“My legs and fingers were numb. It was terrifying,” he told The Sun. Luckily, he knew about his existing heart condition and asked to be sent to the hospital. It was, as he suspected, a heart attack. Surgeons performed emergency surgery to replace a valve, leaving him with an eight-inch scar.

“The doctors said it was probably stress related and I was nervous because theology was one of my worst subjects,” said Chandran. The university used earlier marks to determine his A-grade in the class. He plans to study politics in Australia.