Can we really blame hunger and depression on tuition? 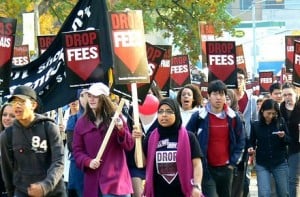 What does a slight rise in antidepressant use at the University of Ottawa have in common with a jump in students using the campus food bank?

“I think financial stress is a big reason for students relying on antidepressants a little bit more over the last few years,” Ann-Marie Roy, vice-president of the Student Federation of the University of Ottawa, told CBC last week when asked about growing antidepressant prescriptions on campus.

“We don’t think that people should have to choose between paying tuition fees and eating,” Chris Hynes, director of the SFUO food bank, told CBC a few days later when asked to explain a 10-fold increase in campus food bank customers since 2007.

Tuition is indeed rising in Ontario. Undergraduates here pay the highest average fees in Canada at $7,180 and growing five per cent annually. But do fees really explain depression and hunger?

I’m not so sure. Although there has been a 10-fold increase in food bank use at the University of Ottawa since 2007, that food bank has only been open since 2007. New services tend to take a few years to get up to speed. The increase there may simply be the result of better advertising.

Speaking of better advertising, there’s a bigger focus on mental health on campuses than ever before. I’d bet that the rise in prescriptions is at least partly explained by more people seeking help.

The best available statistics don’t support the theory that rising tuition causes depression. Each year, the National College Health Assessment asks tens of thousands of North American students about their health. In the fall of 2000, 43.7 per cent of them said that in the previous year they felt “so depressed it was difficult to function.” In the fall of 2011, that number had dropped to 30.3 per cent. Another NCHA metric also suggests depression isn’t rising. In 2000, 10.1 per cent of students said they were diagnosed or treated for depression. In 2010,  that too was down, to 8.3 per cent.

Meanwhile, tuition at public colleges in the United States increased between 2000 and 2011 by 45 per cent. If depression is linked to tuition increases, wouldn’t we see that borne out here?

Student activists would be well-served to remember the boy who cried wolf before they cry “tuition” for every problem. When students are told, without much evidence, that rising fees are to blame for everything from depression to hunger, they might stop listening altogether.