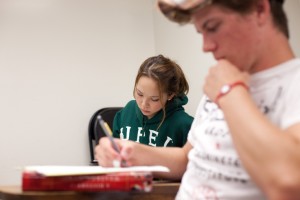 The University of Prince Edward Island Student Union says it will continue to keep the details of its budgets “for members only.” In other words, these pie charts with no figures attached are all that will remain posted on their website—the place where the public would normally expect to find details.

This comes after students demanded at a meeting last week that the union make their plans for spending easier to find, reports The Cadre.

That meeting resulted from a Facebook post that made the rounds. It said: “$700 of your dollars will go to the UPEISU over four years. Do you think that the SU budget should be accessible to the students and be able to see how they’re spending your money? Post this if you are concerned…”

But the student union argues that the budget is already available to members. That’s true—it’s available for students who trek down to the Vice-President of Finance’s office and happen to find her unoccupied. Or for those who made an appointment already. Who has time for that?

The UPEISU says that it is planning to make it accessible online, but rather bizarrely, students will need to log in with their student ID numbers to get access. It’s apparently that much of a secret.

UPEISU President Rob Livingstone explained in an e-mail that the budget can’t be public because of “the fluid nature of the document.” He explains that “projects arise after the final approved copy has been made or approved projects are cancelled.” He also says the secrecy is for “privacy” reasons because “we did not wish to force full-time non-student staff to disclose their salaries.”

Certainly no one likes their salaries published. But students deserve to know at least the anticipated cost of salaries overall. That way they can decide for themselves whether it’s reasonable that the average wage at their student union is $31 per hour, like it is at Simon Fraser University.

Why does this matter? Because student unions frequently lose money and students rarely ever find out. Can you think of a better prospect for making money than a license to sell beer and nachos to students? Probably not. Yet managers of campus pubs across the country lose reams of students’ dough each year. Just look at the financial statements of the Students’ Council at University of Western Ontario. Their campus pubs lost $189,000 in 2009 (although they’re doing better now).

Wouldn’t it be nice for students to know how much money their student union is planning to lose this year, so that they can support politicians who help keep student fees from rising next year?

Sadly, UPEISU isn’t the only student union that won’t publish its anticipated spending in an obvious spot for all to see. In my recent study of 45 Canadian universities only 35 per cent had an easy-to-find fee breakdown. More than half wouldn’t even respond to a request to see one.

That leads to the question. Have student unions got something to hide?