We must engage the past even when it's uncomfortable 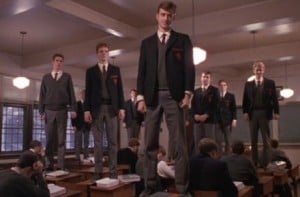 Remember the end of the film Dead Poets Society? When the students all stand up on their desks and cry “O Captain, My Captain!” as a tribute to the wronged and noble teacher Mr. Keating?

The reference is, of course, to a famous poem by the American writer Walt Whitman. Whitman is one of the giants of American literature, and the poem is usually interpreted as an elegy to the recently assassinated president Abraham Lincoln. Lincoln, of course, was, much-hated in the South for, among other things, his opposition to slavery.

So it might have come as a surprise that the man who so eloquently eulogized the Great Emancipator is now at the centre of a controversy over racism. A graduate student at Northwestern University is, according to reports, willing to fail a class rather than perform a piece of music based on a Whitman work. The student insists that Whitman was an “historically racist” man, who denigrated African Americans and opposed their voting rights.

His teacher, reported as Dr. Nally, said that the student must perform the work assigned or fail.

Though standing up to racism is, in the most general terms, laudable, even the most basic sense of history makes it evident that, as Oscar Wilde said, “the truth is rarely pure and never simple.” People live in a particular social context; their ways of thinking are not predetermined, but inevitably shaped by that context. Few, if any, can entirely rise above the values of their time, even when they try.

Case in point: have a look at this good summary of the poet’s views which traces Whitman’s “confused and contradictory” positions on race in his time.

So even if we accept that Whitman was, to some extent, a racist by modern standards, we must also admit that human history is in large part the history of deplorable attitudes. Rejecting anyone and anything that has any connection to immoral attitudes is to reject nearly all of history.

Of course, if you don’t care to read Whitman in your own time, that’s your business, but it is the role of a university professor to present a course of study that allows the student to gain an appreciation of the subject matter.

If all students were free to do as our grad student did, that fundamental duty would be impossible to carry out. Philosophy classes would be hobbled: have you read Aristotle’s defence of slavery? Goodnight sweet Shakespeare for his racism and sexism. No chance of getting to know Dickens’ Oliver Twist because of its anti-Semitism. The whole discipline of Anthropology has a pretty shady past, too, so there goes that.

If students can pick and choose what they are willing to read and engage with—and to toss out anything they find offensive or uncomfortable—they will be missing a crucial part of education: the process of coming to grips with the complex and often disturbing legacy of oppression, brutality, and stupidity that comprises a great deal of our collective past.

Let’s hope this is an isolated incident and not part of a larger trend. If it is, I may be packing my boxes one of these days.

Maybe my students will stand on their desks for me.