Profs from St. John's to Victoria have had it with the wreckage of bad grammar 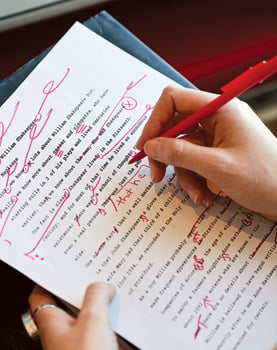 First year students arrive on campuses with their laptops, an iPod, an iPad, a Twitter account, a personal blog and a Facebook page. “They are so expressive and they have so much to share,” says Margie Clow-Bohan, director of the writing centre at Dalhousie. “But the writing skills need work.”

Most of Clow-Bohan’s colleagues would say she is too kind. The class of 2011 is opinionated and expressive but they can’t structure an essay, don’t know how to write an introduction, write paragraphs that are two pages long, and have murderously bad grammar. This is the lament of professors from Victoria to St. John’s. “The grammar sucks and the writing is awful.” So says Paul Budra, associate dean and English professor at Simon Fraser University, about the quality of the essays he sees: fragments, comma splices, apostrophe, pronoun and agreement errors, and tense mistakes. High school teachers are failing students, he says. “There’s this emphasis on expressing yourself, on this idea that if you get it on the page, it will be fine,” he says. “It’s not.”

“Universities teach subject matter, not writing,” says Richard Stren, a political science professor at the University of Toronto. “It is assumed that by reading academic articles, students will absorb how to write. It doesn’t work. I gave out a lot of Cs.”

“Teachers are afraid to teach grammar,” says Visnja Cuturic, an ESL instructor who teaches grammar and academic writing at the University of Toronto. “They know the rules instinctively, but they can’t teach them. And rote learning is a thing of the past.”

I know this first-hand. I teach a college English class at a downtown college in Toronto. The first time I collected essays from my students, who are a variety of ages but have all received a high school degree, I was stunned. Subjects didn’t agree with verbs. Sentences started on page one and kept up the fight until page two. Commas were either used not at all or appeared in startling places. It wasn’t that there weren’t any ideas in the papers; it was that they were so buried by the wreckage of bad grammar it would have taken the jaws of life to free them.

“I believe writing well is intricately tied up with thinking clearly. As a responsible citizen, you have to grapple with issues at a very deep level, and if you can’t do that on the page, you’ll have trouble,” says Ginny Ryan, director of the writing centre at Memorial University in St. John’s. MUN students come to her writing centre for hour-long sessions; the students get one-on-one attention from a graduate student in their discipline. Since 2008, MUN engineering students are required to write an essay on ethics. Ryan visited the engineering classes and taught essay writing to the students. “It’s difficult to escape MUN without some kind of writing skill,” she says.

Dalhousie requires students to take two “writing-intensive” courses before they graduate. Erin Wunker, an English professor at Dalhousie, teaches a year-long introduction to literature class, which is considered writing intensive. Wunker doesn’t make it an easy ride. “I wear them down,” she says. “I tell them they’ll use these skills if they are writing a persuasive demand for a raise or explaining, in a cogent fashion, the source of a patient’s illness.” Wunker matches students with a peer-editing buddy. “They’re not allowed to write sycophantic, empty comments like: ‘I liked your essay!’ ” she says. “They have to write critical and thoughtful things, or they don’t pass,” she says. The improvement is astonishing. “The students always say they dreaded the peer editing but it turned out to be the most helpful part of the course.”

There are five writing centres at the University of Toronto where undergrads can get help from graduate students. “There was a sense that we weren’t reaching enough students,” says Sandy Welsh, a sociology professor and vice-dean of teaching and learning in the faculty of arts and science at the University of Toronto. Enter the Writing Instruction for TAs (WIT) program. Ivan Kalmar, an anthropology professor at U of T, teaches an introductory course with 1,200 students. The class is broken up into groups of 30 students, and each student attends eight tutorials, run by WIT-trained TAs. Every student submits an essay proposal before turning in an essay, and the TAs, Kalmar says, catch the big errors before the final paper comes in. “It’s an opportunity for students in a massive class to get one-on-one feedback,” he says. “The marks have gone up tremendously, and the students say the tutorials were the most rewarding part of the course.”

“We shouldn’t be waiting until smaller classes in the second or third year to introduce writing skills,” says Kalmar.