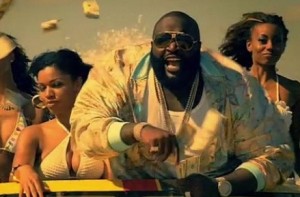 A hip-hop concert cancelled earlier this month in Ottawa is fueling debate about which performers student union money should fund and whether artists’ freedom of expression has been silenced.

Pandemonium, the annual year-end show subsidized by the Carleton University Students’ Association (CUSA) and the Student Federation of the University of Ottawa (SFUO), was to be headlined by rapper Rick Ross on April 9. But numerous students from both universities urged their student unions to pull out because they said Ross’ recent lyrics glorify date rape. SFUO and CUSA eventually pulled the plug and the show was cancelled. Shortly afterward, athletics company Reebok announced it was dropping Ross.

It’s not just an issue in Ottawa. At Harvard University, a performance by the rapper Tyga went ahead Saturday despite an online petition with more than 1,000 signatures demanding a student board cancel it. Petitioners said his lyrics in the song “Bitch Betta Have My Money,” are “explicitly and violently misogynistic.”  Tyga performed the song on the weekend, “despite all the haters.”

It was the song U.O.E.N.O, released in February by the artist Rocko which featured Ross rapping and led to the cancellation of Pandemonium in Ottawa. “Put molly all in her champagne/She ain’t even know it/I took her home and I enjoyed that/She ain’t even know it,” he raps in the track. Molly is the slang term for the drug MDMA, which may cause users to lose their inhibitions.

Kira-Lynn Ferderber, a former student of Carleton University, says she was both “offended” and “concerned” about the initial decision to fund the Ross concert. Most full-time students at Carleton pay $115.28 per year to CUSA and U. Ottawa students pay $88.98 to SFUO. That’s why she created a Facebook group on March 25 calling on them to cancel the show.

Ferderber says student groups on campus who work hard to combat “rape culture” don’t want to have student funding directed toward lyrics that condone it. “[U.O.E.N.O] is about a particular kind of sexual assault that’s really common on campus,” she added. The song talks about using alcohol or drugs to, “make somebody more easy to be victimized,” she explains.

Cameron Rufelds, a second-year law student at Carleton, says that although he was against having Ross perform, he does not understand the obsession over the lyrics in just one of Ross’ recent songs, considering that the rapper has long promoted drug dealing, violence and alcoholism. He says it did not make sense for student unions to select and promote Ross in the first place.

Nick O’Brien, a University of Ottawa student who joined the Facebook group, says that people are afraid to defend the rapper out of fear of being accused of supporting sexual assault. But he says that Ross is an artist, not an activist, and that while it would be nice for all artists to be sensitive to the thoughts of all citizens, “it is his job to express himself freely in whatever way he chooses.”

“I am not a Rick Ross fan,” adds O’Brien, “but the beautiful thing about the freedom of expression is that it only works if you allow people to speak who you do not agree with as well,” he adds. “University is a place where human rights are protected and controversial issues are critically analyzed, not a place where they are silenced.”

Braydin Frizell, a fourth-year communications and business student at U. Ottawa says he was disappointed the show was cancelled, but agrees with the decision. “Pandemonium was a great experience for me and a number of my friends. I went to the last two, Girl Talk and the Arkells, and I thought they put on a great, and more importantly, inexpensive show,” he says. “Hopefully [CUSA and SFUO] can find a way to work together next year and find some more appropriate acts to put on stage.”

Jessica McCormick, National Deputy Chairperson of the Canadian Federation of Students (CFS), says that student unions must be held accountable by the students they represent and that students who disagree with their representatives’ decisions need to speak out and get involved. She says the backlash toward Ross could have been prevented by consulting with students. “I’ve seen student unions have online polls about who [students] would like to see come on campus or survey their members about particular artists that they would like to see perform,” she says. “Those consultation pieces are very important in recognizing that not everybody has the same taste.”