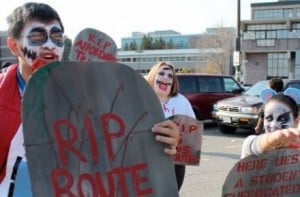 Photo by Jane Gerster of The Charlatan

Zombies welcomed public transit users at Carleton University’s main bus stop on Halloween morning. The students in costume were protesting what they called “the death of affordable and accessible transit,” and were collecting signatures from supporters to send to city council.

The protest was a response to the local transit authority, OC Transpo, which announced that Ottawa university students will pay $180 per semester for their universal transit passes (U-Passes) next year. That’s a 17 per cent hike from the $145 they paid this year. According to the Carleton Undergraduate Students’ Association, the new price—$360 a year for most students—means Ottawa and Carleton will have Canada’s most expensive student transit passes.

In contrast, consider that students at Dalhousie University in Halifax pay only $69 per semester.

Students are also frustrated that they will pay more while other public transit users will only face a 2.5 per cent increase and the fact that the price hike announcement came just weeks after service cuts were made. This is only the second year for the U-Pass, which all students are required to buy.

In a statement on their website, CUSA claimed that with a 17 per cent price increase, or even a 2.5 per cent increase, the City of Ottawa is aiming to generate “profit” from the U-Pass program.

But OC Transpo said the price increase is needed to cover costs, not to generate profit.

Vincent Patterson, manager of marketing and strategic development for OC Transpo, told Maclean’s On Campus that City Council requires OC Transpo to recover 50 per cent of its operating costs from fare revenue. The other 50 per cent comes from taxpayers.

Last year’s “introductory price” for the U-Pass caused the company to fall short on that goal, he said.

Patterson also said the price hike means OC Transpo will be obtaining the same revenue from students as before the implementation of the U-Pass. “Yet at $180 per semester, the U-Pass holder does benefit from a 29 per cent discount compared with the [high school and college] semester pass and a 40 per cent discount compared with monthly passes,” he added. The semester pass itself is less than half the cost of the pass offered to adults.

Still, the Vice President of Student Issues for CUSA, Chantle Beeso, isn’t convinced. She told the Ottawa Citizen she wants Carleton students to pay no more than the 2.5 per cent increase other public transit users will pay. She went as far as to suggest that the major price increase may lead to a referendum, which she suggested could put an end to the U-Pass program.