Students go to where the ‘Bucks’ are 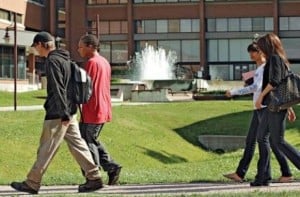 Bursaries and scholarships are great when students have already made up their minds to go to college or university. The challenge for Sudbury’s Cambrian College, which serves remote and rural populations in northern Ontario, is how to get students to consider going to college in the first place.

Three years ago, the school launched something called a learning account, aimed at the students least likely to attend college: Aboriginals, those with disabilities and those whose parents didn’t have a post-secondary education. The program offers students credits toward future tuition costs in exchange for attending a series of workshops. Students can earn $70 in “Cambrian Bucks” for attending a conference on coping with learning disabilities, $20 for a science workshop and $320 for a four-day program aimed at Aboriginal pupils. The college also gives $120 to parents who attend a two-day program to learn how to help set career goals for their children. So far, 410 students have signed up with an average of $250 in tuition credits, although they can earn as much as $3,000.

The tuition credits act like a bursary, but with a long-term goal of getting the kids to start working toward college while still in elementary school. “For most of these underrepresented populations, getting them to post-secondary is a long process,” says France Quirion, Cambrian’s associate vice-president of student services. “They don’t live and breathe post-secondary. It’s just a foreign concept.

“We really wanted these different individuals to start to see themselves as going to post-secondary because it was always part of the plan. You can’t do that with a bursary at Grade 12.”

In offering college tuition credits to students, including some as young as kindergarten whose parents have set up accounts, the college is trying to tackle one of the greatest challenges facing Canada’s post-secondary education system. A review this year by the Organization for Economic Cooperation and Development ranked Canada among the best in the developed world when it comes to the number of Canadians who have graduated from college and university, but second-last when it comes to educating the children of poorly educated parents—particularly when parents haven’t graduated from high school.

It’s the paradox of diminishing returns, says Andreas Schleicher, the OECD’s deputy director for education. “It’s a much smaller faction of the population you’re dealing with” that doesn’t finish high school, he says, “but it’s also more extreme.”

Fixing the problem depends on what’s causing it, which in Canada differs based on where you live. In provinces like Alberta and Saskatchewan, the challenge to post-secondary education is the strong economy, says Ken Steele of higher-education market research firm Academica Group. When students can earn good money working in the oil and mining sectors with a Grade 12 education, there’s little incentive to spend years and thousands of dollars going to university. That’s a problem particularly among male students, for whom enrolment rates tend to fall when unemployment goes down. (For female students, it’s the opposite.)

That has also been a problem for Cambrian, where Sudbury’s local mining sector has lured students out of school. This year, the college began offering students a 15 per cent tuition rebate if they graduated and plans to survey its dropouts to find out how many left because they found jobs.

The biggest barrier, says Steele, is simply that parents’ own level of education closely mirrors their priorities for their children. The correlation with parental education, says Steele, is greater than with parental income or tuition costs. “If my parents were educated, wherever I live in the country, I’m more likely to go on to university,” he says.

Sarah Umakoshi, 26, said her parents initially resisted her plans to go to college at Cambrian, 13 hours away from her home in Thunder Bay. “Neither one of them had gone to post-secondary, so they really didn’t see the need for me to go,” she says. “I didn’t see myself as someone who would go either.”

Now in her third year studying to be a child and youth worker, she mentors other students who are the first generation in their family to attend college. When she graduates next year, she plans to find a job in her field in Sudbury. Her two younger sisters have since gone on to post-secondary school. Her parents, she says, have come around to her decision. “I’m happy—I have a lot of new friends here, a lot of good connections when it comes to employment,” she says. “When I ended up coming here, I surprised myself, because not only did I make a good decision, I was excelling at it.”