Students sick of being passed by buses

Wait for better transit to campus keeps getting longer 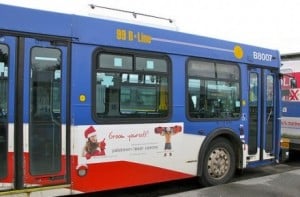 In the Western Gazette this week, writer Mary Ann Ciosk describes a scene that plays out hundreds of thousands, if not millions, of times a year in university towns across Canada:

“I check the time again—the bus is now 20 minutes late, and I have three minutes remaining before my class starts…  Finally, a low mechanical growl can be heard in the distance, and around the corner appears our salvation, the 2 Dundas! But as the bus approaches, a new horror sets in. The 2 does not slow as it draws near the stop, but speeds past us with its cargo of disgruntled students tightly packed together—the bus is full.”

The issue of full buses making students late has long captured the imagination of campus news editors and student leaders. This fall is no exception. University of Lethbridge students pushed for better transit at a recent mayoral candidates debate. The Carleton University Students’ Association recently met with Ottawa transit officials to tell them too many students are getting passed up. In Victoria, B.C., post-secondary students held up signs on a street corner protesting poor service.

Nonetheless, in some cities at least, the wait for a better ride to campus just keeps got longer.

At the University of British Columbia, the Alma Mater Society pulled a publicity stunt on Sept. 23 to promote building a rail line to serve its Vancouver campus. They rented a coach, decorated it, blasted music and picked up students in the “Party Bus” all along the route of the 99 Broadway, where students report being passed up as many as 10 times before a bus finally stops. This week the AMS learned they’ll need to keep waiting. The transit agency’s proposed 2014 budget includes no new money for rapid transit to UBC and instead will focus mostly on fixing a bridge.

In Toronto, the decision over whether to build a subway line or a new LRT to suburban Scarborough consumed lots of ink in local newspapers and oxygen at city hall until council finally decided last week to build a subway. One of the earliest proposals to be killed was the one demanded by students: an LRT to the growing campus of the University of Toronto Scarborough (UTSC).

In London, Ont., where the city is considering a new bus system that would speed up trips to Western, the mayor recently expressed frustration (his exact word: bullshit) at a city staff report that said it would take 17 years to complete. Council has asked staff to show if it can be done in 12.

And so, for the foreseeable future, students from UBC to Western can expect to get passed up.