Injuries could be reduced with barriers, regulated speeds 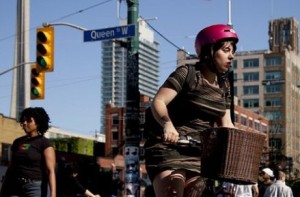 Some simple changes to the infrastructure of Canadian cities could go a long way towards keeping the country’s biking enthusiasts safe from harm, a team of researchers suggested Wednesday.

Erecting physical barriers between traffic and bicycle lanes, ensuring relatively flat commuting surfaces and regulating vehicle speeds all have the potential to curtail cycling injuries on city streets, they said.

The findings came from a cross-country team of researchers and was published in the Journal Injury Prevention.

The team’s objective was to explore the factors that contribute to Canada’s strikingly high rate of cycling-related injuries, according to the study’s lead author.

Anne Harris, assistant professor with Ryerson University’s school of Occupational and Public Health, said several previous studies have established that North American cyclists are eight to 30 times more likely to be injured on the road than their counterparts in European countries such as Germany, Denmark and the Netherlands.

The figures could not simply be chalked up to cycling volumes, she added.

“In the cycling countries of northern Europe, you see a much larger proportion of trips taken by bicycle and much lower injury rates,” Harris said in a telephone interview. “We thought one of the reasons that there might be differences is because of the availability of bicycling infrastructure.”

Harris and her team interviewed 690 cyclists who were injured badly enough to require a trip to a hospital emergency room between May 2008 and November 2009. The injuries came on either the streets of Vancouver or Toronto.

Researchers compared the point at which the interview subject got hurt with earlier intersections along the route that were passed without incident. The findings, Harris said, allowed the team to draw some conclusions about potential safety innovations for Canadian city streets.

One comparatively simple measure would be the introduction of bike lanes that are physically separated from the street, she said.

“Just as we know that separating pedestrians from motor vehicle traffic is a really important thing to do with sidewalks, we’re seeing evidence that we need to separate bicyclists from motor vehicles with the use of segregated facilities.”

Those facilities need not be elaborate or expensive, she said, adding rows of planters are often enough to provide a protective barrier between cars and bikes. Such lanes are the norm in Europe, she said, adding designated bike paths marked out only by a painted line do not offer the same degree of protection.

Regulating traffic speeds could also prevent injuries, Harris said, adding accidents were 50 per cent less likely to take place at intersections where traffic moved at 30 kilometres an hour or less.

Traffic circles also posed additional dangers to cyclists, the study suggested. Harris said researchers also noted certain types of terrain that were more likely to result in a trip to the hospital.

Upward slopes were safer than downward ones, she said, adding flat surfaces offered the most protection of all.

Canada’s naturally hilly cities would be powerless to address this concern, she conceded, but added centres such as Toronto are ideally equipped to implement infrastructure changes that could have benefits beyond road safety.

Increased cycling use, she argued, could have positive ramifications on everything from gridlock to the environment.

“Much of the infrastructure changes that would make things safer are also attractive to bicyclists, so it would encourage more people to ride,” she said. “It’s a public health issue.”