Returning can be fraught with bureaucratic hurdles 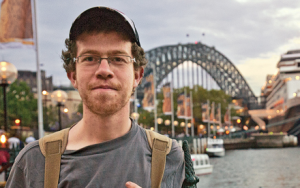 From the Maclean’s Student Issue, on sale now.
Story by Ian Bethune.

Two years ago, as a 21-year-old fine arts student at York University, I embarked on one of the great times of my life, a third-year overseas exchange at Flinders University in Adelaide, Australia. I went into this concentrating on the expected hurdles—booking flights, arranging lodging, selecting classes, finding my footing on the other side of the world—and discovered the really hard part took place long before I stepped on the plane. Wandering wide-eyed about Adelaide was nothing compared with the uncoordinated demands of two Byzantine university bureaucracies.

But I survived the existential struggle with the paperwork and thrived on the exchange, an unforgettable experience I’d recommend to anyone. I also developed the laughable idea that going home would be—new Australian phrase I learned—“a piece of piss.” After all, what could be difficult about returning to my home and familiar native land?

Reverse culture shock, for one thing. Coming back was harder than I imagined, and not just because my parents were suddenly 15,000 km closer again. Part of it was precisely because Australia is so similar to Canada in so many ways. That made the things I liked best there even more painful to do without here. If Adelaide can organize a reasonable transfer system for its public transit, why can’t Toronto? For that matter, why can’t Canadian cities have as much green space as drought-prone Australian cities? My initial disorientation at home was nothing compared to what I experienced abroad, of course, but everyone expects to feel like a stranger in a strange land, while no one is prepared to feel like that at home.

The other thing returning students need to know is the bureaucratic struggle is far from over upon your return. The most important step is to ensure your overseas credits are accepted as part of your degree. It’s always best to know what classes you want to take abroad so you can find out if your home university will count them toward your degree—that was one of the hoops I had to jump through before leaving. However, many universities, including York, do not let you select for your second term until you are overseas, or you may (as I did) change your mind about the classes you want in your second semester after you’ve begun your first. In that case, unless you are in the fortunate position of having a lot of free spaces to fill with whatever non-degree courses you want, you need to find out from your home university whether those courses fit the degree requirements. There is nothing worse than coming back to learn that your foreign classes are not recognized. That could require another term or even another year at school, with all the attendant costs.

As soon as I was back I made an appointment with my adviser at York. Even with all my precautions, problems cropped up, most centring on the different credit systems between York and Flinders. Since Flinders gave me 36 credits for a full year compared with 30 at York, York believed I had six more credits toward my degree than I had. I thus under-scheduled my fourth and final year. The more I counted up and cross-referenced my credits, the less this added up, and it was only by proactively going back to my adviser that I avoided disaster. I would have reached graduation this spring, only to learn I was six credits short of a degree. Welcome to fifth year.

Anyone planning to go abroad would be well advised to confirm—at least twice—what your home university thinks of your overseas exchange credits, which will let you know how many credits you need for your degree. It will save you not just many headaches later on, but quite possibly a lot of money. Additionally, bear in mind that overseas exchanges can affect any continuing scholarships you may have, especially—as in the case of Australia—if the host university’s school year is different from your home university’s. The Australian school year runs from early March to late November, which corresponds to the southern hemisphere’s fall and spring. Because I was out of school for 10 months before classes started at York the following September, I hadn’t taken enough 2011 courses, according to York’s rules, to maintain my renewable $2,000 entrance scholarship.

Exchanges are fraught with hurdles before the trip and after. Problems will inevitably appear, including some that you had never even thought of. Just remember that at the end there is something worth the hardship: a chance to experience a whole new culture, society and way of life.