Swearing as a second language 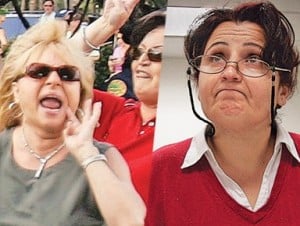 English as a Second Language (ESL) now goes by the new, politically correct name of English Language Learning (ELL), in official recognition of the fact that immigrants new to Canada may know more than one language already. That doesn’t, however, make the average ELL student a champion of political correctness. At least it’s doubtful that Amira Azad, an Iranian Muslim woman in her mid-40s, had cultural sensitivity on the brain when she interrupted our ELL tutorial on the prepositional phrase. “May I ask a question?” she said, and then leaned closer to whisper: “Tell me please, what is the difference between a slut and whore?”

“The first sleeps with a lot of men,” I answered when I recovered, “and the second gets paid to do the same.” “Oh,” she said, “same in Iran.” Amira (who, like the other students interviewed, requested that her name be changed) asked roughly 30 similar questions that day, compiling a mini lexicon of English curse words and expressions that she covered with her hands every time the program supervisor walked by. Writing down the definition of “bitch,” she noted: “Thank you. My sons will be punished.”

As someone who’s been volunteer-teaching ELL at my local library in Halifax for the past three years, I assumed that people like Amira immigrate to Canada and learn English for a “better life.” But we seldom ask exactly what kind of English is most relevant to that life. A 2007 survey of ESL students by the B.C. Ministry of Advanced Education cites the ability to use English in daily life as the single most important goal for learners; above both employment advancement and access to higher education. Chinese immigrant and English language learner Michelle Wong (who also asked that her real name not be used) points out that “everyday English” is far removed from textbook English. “In [textbook] English you have lots of grammar rules,” she says, “and I noticed people were not always following these rules. They used slang and swear words and it confused me.” To remedy her colloquial gaps, Michelle enrolled in a free, student-driven ELL program at the Halifax Regional Library (the same program I volunteer with, and Amira belonged to), where her volunteer tutor briefed her in conversational English, Western profanities and, finally, the answer to something that had been puzzling her for a long time: the definition of “funky.”

Frances Smith-McCarley, the coordinator of the program, is a street-speech activist in her own right. Helping students grasp not only English grammar but the naughty parts that go with it is, she believes, a lesson in survival skills. “What most concerns me,” she says, “is when our students hear racial or religious swear or hate words and may not know that they or their children are the victims of discrimination.” In other words, Amira didn’t have to cover her notebook when Smith-McCarley walked by. In fact, she didn’t need a notebook to begin with.

This is something David Burke, author of The Slangman Guide to Dirty English, has been preaching for 20 years. Burke, an American writer, has written over 50 books and products specializing in cross-cultural slang and idioms—many of which have been distributed to ELL programs around the world. Burke acknowledges that making the vernacular and the profane respectable hasn’t been an easy battle. “I was once the ESL bad boy,” he says. At his first TESOL conference (Teachers of English to Speakers of Other Languages) in Arlington, Texas, in 2001, an incensed fellow attendee told him that he had no business teaching informal language, and that his disregard for “pure English” would sully the name of ELL education everywhere. “She caused a scene so loud,” he says, “other teachers came over to my booth to watch!” The showdown came to an end when the purist made the mistake of telling Burke he really ticked her off. “Tick you off?” he said, “That’s slang.”

Nowhere is Burke’s obsession and message more applicable than in this country, where Statistics Canada estimates that by the year 2031, one half of the population over the age of 15 will be foreign-born or have at least one foreign-born parent. A Canadian citizenship hopeful won’t find the sort of language on her citizenship test that she’d find in one of Burke’s books, but just because she isn’t required to know English slang or swearing to become a Canadian doesn’t mean she won’t need it in order to feel like one.

Everyday language, the discourse of everyday people, has never worried about being politically correct. What’s ironic is that our Canadian fear of cultural imposition (always the mosaic, never the melting pot) might end up disadvantaging the very people we’re trying not to impose on. Knowing the proper place to use “slut” and “whore” might not be polite, but it’s just as important as etiquette when it comes to building an identity in your new home. Amira’s only complaint about Canada was that its native citizens were far “too nice.” Fortunately, her sons weren’t.