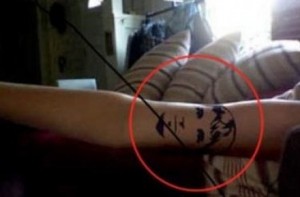 A University of Victoria student got a midterm lesson on how to become an Internet celebrity after a post on his Facebook wall went viral.

Soon after Austin Knill told his friends that he’d started dating a girl named Sara Hartly, a photo showed up on his wall which showed an extraordinary Valentine’s gift from her—his face inked on her bicep.

The post lit up with comments. Within two days, Knill had received hundreds of Facebook messages. Someone—not Knill, he says—had posted the transcript on sites like Reddit and it had quickly spread as far as Singapore and the U.K.

But when news site OpenFile investigated, Knill admitted that the girlfriend is fictional. The tattoo was created in Photoshop. It was a practical joke that worked better than anticipated, he says.

Knill says he never intended for it to go viral—although he does have orders for t-shirts.