What students are talking about today (January 24th) 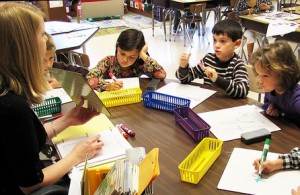 1. Roughly half as many people in Ontario applied to start teacher’s college in 2013 than applied in 2007 and there was a 15 per cent drop in the past year alone, according to new numbers from the Ontario Universities’ Application Centre. There were just 8,199 applicants this year, compared to 16,042 applicants six years ago. There were 9,638 in 2012. The University of Windsor saw the biggest decline with 25 per cent fewer applications. It looks like students are getting the message about the shortage of teaching jobs. There was such a mismatch in recent years that Ontario capped the number of first-year education students at 9,058. It looks like that cap won’t be needed.

2. Emily Carr University is getting $113 million in provincial funding to move its campus to Great Northern Way, a less central but more spacious location in suburban Vancouver, reports The Province. The art and design college’s current location was built for 800 students but has 1,800, meaning many qualified applicants have been turned down. The building will open in July 2016.

3. The “epic student sex adventure,” at Oasis Aqua Lounge held by the University of Toronto Sexual Education Centre earned international media coverage so it’s not surprising that more than 200 people showed up. Kristine Wilson was there on Monday reporting for The Ryersonian where she noted protesters outside shouting “God Loves You,” many naked people inside, someone tethered to the wall in chains and leather binds, and yes, people having sex in front of strangers.

4. Students at Mount Allison University were surprised to learn their student union president, Pat Joyce, favours higher tuition. He told The Argosy he supports an increase with the caveat that the money the government saves from any tuition increase “go into targeted financial aid.” He says students who can afford to pay more should while those who can’t should get more aid.

5. Students at UBC are talking about animal research again. The group STOP UBC Animal Research’s petition demanding a ban on certain types of animal research is close to 10,000 signatures, reports The Ubyssey. The group’s eventual goal is a total ban, but they’re currently looking to stop research that causes “moderate to severe distress or discomfort” or “severe pain near, at or above the pain tolerance threshold of unanesthetized conscious animals,” known as Categories D and E. UBC is exceptionally transparent about animal testing on campus, releasing detailed statistics on how it’s used. Animal rights activists had a big win in the United States this week: more than 300 chimpanzees who spent their lives in research labs will be retired by the National Institutes of Health and the roughly 50 kept for research will get better housing.