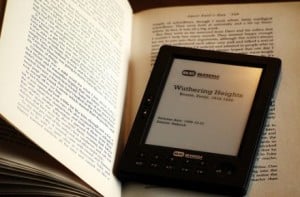 One day, when I was a PhD student there was a gossipy buzz that went around the halls about a fellow grad student who had arrived to teach a class, found that none of the students had done the assigned reading, and then immediately and angrily sent them all home. We all admired the audacity of the move, and I was a bit disappointed to learn that he had been called to the Chair’s office and told never to do it again.

It was his responsibility, he was supposedly told, to conduct the class whether the students had done the reading or not.

Those events have always stuck with me, and I’ve thought of them often when I find myself in front of a room full of students who clearly have no idea what happens in the play I’m trying to help them analyze. And I thought about it again recently when my attention was drawn to yet another computer-based teaching innovation: e-textbooks that tell your prof whether you’ve read them or not.

According to this New York Times report, new technology from a company called CourseSmart allows instructors to keep track of a wide range of student reading habits. Has a student opened the book? Has she highlighted key passages? If not, according to at least one instructor in a pilot project, the professor can “reach out” to the student and discuss his study habits.

As one might expect, the news has been met with some skepticism. For one thing, as the Times piece points out, the system isn’t necessarily reliable, since a student can electronically open the text but then not actually read it. Besides, there’s more to studying than simply reading the textbook.

More worrisome, though, are the privacy implications. Andrew Leonard, for instance, can’t help but notice that that same Times piece cited above, quotes a Texas A&M Dean who praised the software for being like “Big Brother” in Nineteen Eighty-Four. Although the Dean had insisted that the surveillance would be done “in a good way,” Leonard wryly observes that it’s still “never a good sign when Orwellian dystopia is cited in connection with a commercial product.”

Leonard’s ultimate point is that while it might be all well and good for an individual instructor to talk one-on-one with a student who only looks at the readings the night before a test, when applied broadly, such systems will likely result in faceless algorithms manipulating students’ grades. Double plus ungood.

For me, all of these things are beside the point.

As an instructor, of course, I would prefer that you do the readings I’ve assigned. That’s why I assign them after all, but, frankly, I don’t want the means to actually know when and how much of it you’ve done. I don’t want to call you into my office and ask why you haven’t read anything since October 8th. If there’s a good reason (you were diagnosed with a serious illness), it’s none of my business. And if there’s not (you’re lazy), I’ve just embarrassed both of us. It’s not like you didn’t know you were supposed to do the readings.

Besides, except for cheating and complete indolence, I’m not really concerned about the details of the process; I’m concerned about results. If you learn the material and can apply what you’ve learned, why do I care whether you caught up at the last minute?

Some will, no doubt, object that professors need to find ways to get students to do the reading, lest students should fail to learn. But that, to me, misses the whole point of university teaching. My aim is not to get you to learn: whether you want to learn or not is up to you. My job is to create an atmosphere in which you can learn a lot if you choose to do so. I hope you do, but I’m not going to try to intimidate you into doing it.

In short, students have the right not to do the reading if they don’t want to, and not to be harrassed about it. Professors, meanwhile, should be concerned with creating a rigorous course of study, not playing electronic schoolmarm to naughty pupils who haven’t done their homework. If you’re not careful, you may find yourself having to explain why you angrily sent your whole class home.