Teens who sent Legoman into space had their pick of schools 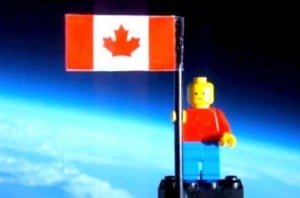 When Asad Muhammad and Mathew Ho mapped out a route for the lego man they hoped to send into space last January, they little imagined they’d be changing the course of their own lives as well.

The voyage they planned for the toy figure was originally conceived as a fun project for two high school friends who shared a love of science. By attaching cameras to a weather balloon and styrofoam container, the 18-year-olds from Toronto hoped only to capture pictures of the earth’s curvature.

But the lego figure they included in their makeshift craft on a whim catapulted the test flight to greater heights than Ho and Muhammad ever imagined. Footage of the plastic figure soaring 24 kilometres above the earth garnered instant praise once it had been posted to Youtube, and the teens found themselves dead centre on the public radar.

“It’s still overwhelming,” Muhammad said in a telephone interview. “We thought no one was going to be interested in listening to what we did, but when the story got out, it was amazing.”

The changes began in the hallways of the teens’ former high school, where students who once warned Muhammad that the project was doomed to flop greeted him with applause.

As the internet footage gained traction, Ho and Mohammad’s reputations captured the attention of other educational institutions as well. Several universities contacted the pair to offer up tours of their facilities and court them as prospective science students, Muhammad said. At least two followed up the invitations with offers of acceptance.

But the exposure had its downsides too. Ho and Muhammad spent at least four months wading through everything from media requests to lecture invitations, and Muhammad said the hectic pace made them reconsider their future paths.

In the end, neither teen opted to pursue post-secondary education in the scientific fields that seemed such a natural match at first.

Ho is now studying commerce at the University of British Columbia, Muhammad said, adding he himself has enrolled in the aircraft maintenance program at Toronto’s Centennial College.

“I guess you’ve got to lose something to gain something,” Muhammad said of his academic direction, adding he enjoys the practical challenges of fixing airplanes rather than designing them.

That’s not to say, however, that Ho and Muhammad won’t let their experimental fancies take flight once again.

The two are currently debating the merits of trying to launch a full-fledged Lego star ship, which weighs six times more than their original homemade craft and poses a host of logistical challenges.

Ho is all for it, but Muhammad said his first college term has made him much more gun-shy about a more ambitious launch.

“I’m taking this aircraft maintenance program and I know the things that happen,” he said. “It can come in the flight path of an airplane, which I’m really afraid of. We’re still debating whether to do it or not.”