That’s 'professor' uptight to you 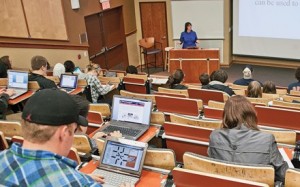 June Madeley is annoyed with the increasingly rude demands she gets from students at the University of New Brunswick in Saint John. Ten years ago, it was common for them to see her during office hours when they had a question. “Now there’s an expectation that we’ll answer their emails immediately and meet them whenever there’s a good time for them.” And as surely as the leaves pile up on campus each October, the communications professor knows her inbox will soon fill with complaints about mid-terms scheduled for the week after the Thanksgiving holiday. “There are a lot of people who feel they can’t make the exam because of travel arrangements,” she says. “And others who think it’s unfair that they have to study that weekend.”

But when Madeley gets frustrated, she doesn’t fire off a snotty email to the student. She logs on to “That’s ‘Professor’ Uptight to You, Johnny,” a Facebook group with 297 members, all of them teaching at universities and colleges. The members-only site is a place where university educators can vent in the form of steaming emails they wish they could write to their students but can’t because that would be, well, rude. Madeley, who says she hasn’t posted yet, enjoys reading the rants from her colleagues. The site is run by Khrystyne Keane, a Connecticut-based editor for a non-profit group, who took over its administration as a favour to a professor friend. The logo—a unicorn standing under a rainbow—is a jab at students, some of whom feel they are every bit as special as the fabled one-horned horse and the multicoloured arc.

The posts are all written to anonymous Janeys and Johnnies, but they share one trait: carefully crafted sarcasm. “Dear Johnny, I suspect that if you had spent as much time and effort on your last assignment as you did on the long flaming email you just sent me, this whole ‘conversation’ would never have happened,” reads one. “Dear Janey, I want to assure you that we didn’t do anything important in class. We just stared out the window for three hours in silence,” reads another.

Nothing riles a professor more than asking about material covered in a skipped lecture. But Joey O’Kane, a vice-president of the University of New Brunswick Student Union, thinks it’s no big deal. He also thinks it’s reasonable to expect email responses from profs within 24 hours, preferably 12. “Professors have a pretty good gig,” he says. “You put in some office hours, you teach for a few hours and then you end up with a decent paycheque, so taking 10 minutes out of your day to respond to a few emails . . . I don’t think that’s asking too much.”

Kevin Maness, another Facebook member from Eastern University in Pennsylvania, recalls a student who emailed him a couple of weeks after the last semester ended and asked if there was anything he could do to increase his grade because he had been “too busy” playing basketball. Incredulous, Maness wanted to shoot off a caustic retort. Long before he had even heard about That’s “Professor” Uptight, someone else had addressed the same complaint with a post that read: “Dear Johnny, Just tell me the grade you want and I’ll change it in the book, because it doesn’t really matter anyway.” After joining the group last month, Maness has found it to be “great group therapy.”

When Maness attended the University of Pennsylvania in the early ’90s, he accepted that professors would challenge him. In return for doing the coursework, he was rewarded with the grade he had earned. Now, if he hands out a C-minus “it’s almost like a complete shock to them.”

So why the attitude? In their book Lowering Higher Education: The Rise of Corporate Universities and the Fall of Liberal Education, University of Western Ontario sociologists James Côté and Anton Allahar say it started when higher education became purely a financial exchange. Funding pressures forced universities to accept as many students as possible, even those who weren’t suited to academics, says Côté. That crowds lecture halls with students who shouldn’t be there.

At the very least, one educator feels students should learn to mind their manners. At the University of Minnesota, law professor Michele Goodwin added “civility” to her course requirements this September. “Failure to follow this guideline will affect your final grade,” she wrote in the class syllabus, explaining that emails should include the basic salutation “Dear Professor Goodwin” and not “Hey Prof.”

She even assigned practice email as homework. “It’s a bit awkward for professors to think, wow, this is actually my job now?” says Goodwin, who blogs for industry publication The Chronicle of Higher Education, “but it’s necessary.” If the new rules don’t work out, at least she has a place to commiserate. The professor can always join That’s “Professor” Uptight to You, Johnny.

Editor’s Note: I wrote this story for the print edition of Maclean’s. As both Profs. Maness and Magatha have pointed out in the comments section, it should have included more nuance. For one, I should have made it more clear that every single professor I spoke to for this piece exuded passion for teaching. Indeed, research shows that North American professors work on average around 55 hours per week and many of those hours are dedicated to helping students learn beyond the classroom—something they get little credit for. The profs. also made it clear that there are many students who don’t fit the stereotype of entitled. I agree. While it’s a challenge to decide what to include in the space allotted, I should have done a better job. I also want to note that there was a factual error in this story that was introduced in the editing process. Maness did not read a complaint “months earlier” from another professor who sarcastically offered to change a student’s grade. That was merely what he said he might have written had he know about the page at the time.