The backlash against unpaid internships

Unpaid interns are illegal and yet ubiquitous 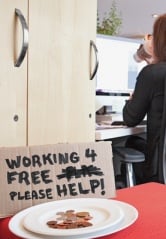 When Michael graduated with a fine arts degree from the University of Toronto last spring to a tough job market, he was thrilled to be offered the position of marketing assistant for a festival. The posting said “compensation to be determined,” which he thought meant minimum wage or more. At the interview, he learned it was an unpaid internship with a $50-per-week stipend. He took it anyway, hoping it would give him “a foot in the door.” He’d live with his parents and get a part-time retail gig to pay the bills. But there was no time for a retail gig. Every evening was eaten up on the phone for work or driving around (in his own car, paying his own gas) putting up posters for the festival.

Laura was similarly disillusioned with her experience. She got no orientation and no training on her first day of work at a big-city daily newspaper. Instead, she was handed a press pass and told to laminate it on her way to the first of that day’s press conferences. She too paid for her own gas, her own parking, her own cellphone bill. The University of Alberta graduate was treated as a member of the full-time reporting staff—except she got paid nothing. At the end of the internship, instead of offering her a paid position, they brought in another intern. They do that every month. “Why hire me when they could just get another unpaid intern?” she says.

It turns out her internship was illegal, considering she was working at a for-profit business, wasn’t in school, and was doing work normally done by a paid employee. But Laura hesitated to complain, for fear of being blacklisted. (Like Michael, she still doesn’t want her real name used for this article.)

It’s the kind of story Alex Try, co-founder of U.K. website Interns Anonymous, hears nearly every day. Interns have written to him complaining of being forced to scrub toilets, having to make tea all day, or spending nights on the street because they missed the last train home from their unpaid gig. Try, who started the website after a night at the pub with friends who’d all graduated from university and fallen directly into unpaid positions, has captured a political movement with the site, which has had 150,000 hits since it launched in 2009. He’s learned of playful initiatives to draw attention to the cause, like the Paid-not-Played Choir, made up entirely of unpaid interns in London. “It’s a sad re-al-i-ty / that I have to work for free / making lots of cups of tea / in a cold gall-e-ry,” they sing in a video on Interns Anonymous.

But he has also learned of a growing trend to correct the imbalance, in part via court cases, like the one launched by an intern who worked as a reporter at the Independent newspaper in London and is now suing the paper for several months of back pay. It’s part of a nascent but growing backlash against the phenomenon of the unpaid internship. In 1992, only 17 per cent of American college students had done an internship (paid or unpaid) by graduation. By 2008, half of American graduates had held at least one internship (most unpaid), according to the National Association of Colleges and Employers. And that was before the job market was flooded with eager, unemployed twentysomethings. “During the recession, companies said, ‘Hang on, there’s this massive surplus of talented labour willing to work for free,’ ” explains Try. He learned that car companies, grocers—even the elite London department store Harrods—offer unpaid internships.

The flouting of minimum wage laws caught the attention of the Obama administration in April 2010. It issued a directive reminding employers of which internships are legal and which are not. California has started issuing warnings to companies who take on unpaid interns. New York has similarly started investigating several unpaid internships offered by employers in that state. And recently, two Oregon men who installed solar panels for their “internship” last year were each awarded $3,350 in pay after they took the company to court. The jury decided they were there to learn, but instead had simply been put to work.

Internships are only legal in America if the employer is a charity or if the for-profit business offering them is “receiving no benefit” from the intern. In other words, unpaid interns are there to learn, not work for free. The laws are similar in Canada. The Ontario Employment Standards Act says that unless interns are students getting credit for school (or they’re working in an industry not covered by the legislation, like government or charities), the employee must be paid minimum wage. And the rules are pretty much the same coast to coast, says Matthew Cooperwilliams, a labour law professor at the University of British Columbia. Employers must ask themselves whether “the duty could go on either the intern’s desk or the paid person’s desk,” says Cooperwilliams. If the task is the same as what they’d ask a paid worker to do, it’s work that must be paid for.

Why, then, do so many illegal internships slip under the radar? As with illegal or migrant workers, there can be lifelong consequences for complaining, like alienating employers and not being able to get another job. So labour standards officials from Saskatchewan and Alberta say they hear few illegal interns complain. Linda McKay-Panos, executive director of the Alberta Civil Liberties Research Centre, also believes many are simply unaware of their rights. She recently put together a handbook for young workers, to educate them.

For employers, the appeal of free labour can be irresistible. It’s hard to miss the irony of the labour-friendly Independent being sued for unpaid wages. (For the record, many large newspapers in Canada do pay interns, as does Maclean’s.) Even the Canadian federal government is guilty of using unpaid labour. Maclean’s spoke with one intern, Martina (not her real name), who worked for a Canadian embassy for several months. “They’d have been screwed without us,” she says, noting that much of her job had been done by a paid employee until recession-time layoffs. Although the job provided valuable experience and contacts, it was a financial stretch to fly to a foreign country, rent a place, buy a transit pass and eat—all on no income. Martina feels guilty her parents could pay her way, providing an opportunity many of her friends can’t afford. So do Laura and Michael, whose parents helped them. But Try says it best: “It’s a moral issue,” he explains, “because it means only those people who can afford to do an unpaid internship can get ahead.”

Not all internships are fraught. Laura’s first internship was a placement with an entertainment management company that trained her in copywriting, databases and video editing. Her boss took the time to review her progress each day. When a job opened up, they offered it to her. Similarly, Michael can’t say enough good things about his unpaid internship at a museum in Toronto. His bosses mentored him throughout. “They were never too busy to help,” he says. He now has a paid job in the field. The difference was that their worthwhile internships were primarily educational.

Alex Try admits there are good internships out there, too, but he doesn’t think graduates should take unpaid work. He points out that the communications firm that hired him into his “first proper job” was impressed by his ability to set up the Interns Anonymous website and manage a media campaign. Potential interns, take note: “What got me the job was not an internship,” says Try. “What got me the job was doing something for myself.”