The dirt on farming

Urban students are getting dirty on campus 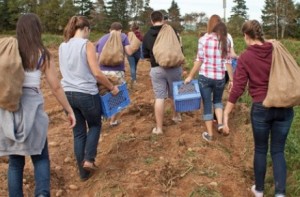 From the 21st Maclean’s University Rankings, on newsstands now. Story by Jason McBride

This past September, New Brunswick’s Mount Allison University held an event unprecedented in its 172-year-long history: a you-pick potato harvest. For the first five Saturdays of the new school year, students and Sackville residents were able to pick Russet and Superior potatoes from a boggy, 9.7-hectare farm in the heart of the campus. The rest of the spud harvest—a yield of 30,000 pounds—was transformed, to the delight of many ravenous undergrads, into fresh, hand-cut french fries and mashed potatoes in the kitchen at Jennings Hall.

The Mount Allison Farm had lain fallow for half a century before Michelle Strain, a gardener and the university’s director of administrative services, revived it this past spring in response to student demand for more fresh, local produce. Strain and her small team sought advice and borrowed equipment from nearby farmers, and received a guarantee from chef Tom Burrell, who runs the dining hall, to buy as much “homegrown”—as the chef calls it with a wink—produce as they could. Third-year anthropology student Heidi Goodine was one of two Mount A students who spent the past summer amending the soil, planting, watering and weeding—all by hand. Menaced by switchgrass, ferocious mosquitoes and relentless rain, the small crew (along with about 100 volunteers) produced a surprisingly large bounty—not just potatoes, but lettuce, cucumber, tomatoes, carrots and green beans. “It was really exciting to see everything blooming and coming out of the ground,” Goodine says. “The weather was so poor we didn’t know if anything would grow.”

Mount A’s farm is just one of many agricultural projects sprouting on Canadian university campuses, often in unexpected places and reflective of a growing cultural obsession with knowing where our food comes from. The University of Manitoba recently opened the Bruce D. Campbell Farm and Food Discovery Centre, the first such facility in Western Canada, and the University of Windsor’s Campus Community Garden Project, which began in January 2010, nurtures connections between school and city through several communal garden plots. Concordia’s Loyola City Farm School Project, a pilot project now in its final phase, is a hands-on urban agriculture training program.

In Fields of Learning: The Student Farm Movement in North America, a collection of essays out this fall, co-editor Laura Sayre argues that student farms “may be essential in preparing our nation and our planet to become part of the food revolution of the 21st century.” As climate change, food-safety fears and declining natural resources make large-scale industrial agriculture increasingly unsustainable, smaller, more nimble and often experimental operations—precisely the kind of farms found on university campuses—and the experience and knowledge to run them, have become even more vital.

Fields of Learning devotes a full chapter to the University of British Columbia Farm, an enterprise founded in 1910 when the school’s commissioners counted on an inevitable agricultural future. While such a future didn’t quite pan out, the 24-hectare*, student-driven model farm has remained an important educational laboratory. Part of UBC’s faculty of land and food systems, it serves as an outdoor classroom comprised of cultivated field areas, greenhouses, a heritage orchard, teaching gardens and chicken coops, all ringed by 90-year-old coastal hemlock forest. More than 2,500 students participate in farm activities each year, with 1,500 obtaining academic credit for their work in 60 different courses, from evolutionary biology to neuroscience. The UBC Farm Practicum in Sustainable Agriculture, which launched in 2008, is an eight-month experiential learning program designed for aspiring farmers. It accepts 10 students a year, and receives five times that number of applicants.

“I’ve seen an interest in farming that really didn’t exist a decade ago,” says Mark Bomford, the farm’s director. As at other universities, most of the interest is coming from students who have little or no farming experience, and who have grown up in urban environments. These students, Bomford says, are increasingly concerned about the health and security of their food, and are also looking for meaningful, fulfilling careers. “UBC Farm allows them to understand the challenges, the long hours and insecurity, of farming,” he adds, “while still keeping one foot in the city.”

UBC Farm has overcome many obstacles in its 100-year history—funding shortfalls, encroaching student housing—and, like other traditional agricultural programs, has had to reinvent and rebrand itself. The Ontario Agriculture College at the University of Guelph, one of the oldest such educational institutions in the country, added a degree-level organic agriculture program in 2004, the first of its kind in North America. In March of this year, it appointed a new chair in sustainable food production, another Canadian first, bankrolled by Loblaw. “We’ve had a long record of excellence,” says Martha Gay Scroggins, who has run the Guelph Centre for Urban Organic Farming program since 2008, “and to maintain that integrity, we’ve had to update, be more inclusive, incorporate sustainability.”

But farming, even on campus, has always been tough. The organic agriculture major was threatened by budget cuts and low enrolment in 2009, but after chefs and other foodies rallied around the cause, the program was given a one-year reprieve, which was extended to 2014 after new courses were added and others were merged or cancelled. Current enrolment is just 20, but Scroggins says she’s seen enrolment in individual courses by non-majors triple since she arrived.

Asked where this interest and enthusiasm is coming from, she says simply, “Survival.” More than ever, she argues, people need to learn self-reliance and how to grow their own food responsibly—for themselves, their families and their communities.

Where they grow their own

For students who like to get their hands dirty (or at least benefit from the bounty), the following schools have community gardens or campus farms:

The Guelph Centre for Urban Organic Farming is a 2.5-hectare certified organic farm. Accepts volunteers (who receive veggies as pay). Produce sold on-site and through on-campus market and donated to the U of Guelph Child Care and Learning Centre.

The University of Windsor Campus Community Garden Project is a small collection of garden beds that grow various vegetables, herbs and fruit. Accepts volunteers. Produce shared between volunteers and charities in Windsor and Essex County.

The Mount Allison Farm grows potatoes, lettuce, cucumbers, tomatoes and other vegetables on about 10 hectares. Accepts volunteers. All produce given to volunteers and sold to the university’s dining hall.

*An earlier version of this article incorrectly stated the size of the UBC Farm.