The final frontier of boorishness 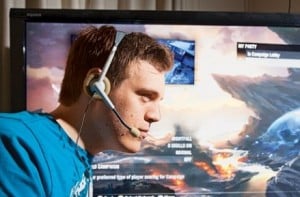 When Lianne Papp started playing shooter games like Counter-Strike online 12 years ago with complete strangers, she noticed something immediately: not only were the majority of those strangers men, but they really didn’t like playing with women. The 27-year-old game developer from Edmonton lists “Show me your t–s,” “I’ve got something for you to sit on” and the more traditional “Make me a sandwich” among the sexist remarks and obscenities she’s received as she played on the web. “Online gaming is plagued with juvenile gamers who sling insults at everyone they can,” she says, “but the harassment women have to deal with is seemingly worse.”

Papp, who now lives in Texas, is one of thousands of women shooting people and blowing up buildings in virtual video games. According to York University technology professor Jennifer Jenson, women make up 20 to 30 per cent of players on the wildly popular World of Warcraft, yet they’re still treated like unwanted outsiders. In her recent virtual-gaming behaviour study with the U.S.-based research group SRI International, “almost every one of them had experienced harassment online.”

That doesn’t mean they’re standing—or sitting—idly by. A number of creative websites have sprung up to combat the barrage of sexist and perverted messages. One in particular, www.fatuglyorslutty.com (named after the most frequent insults received by one of its founders), allows female gamers to submit their most offensive slurs. Co-founder Jon Rosebaugh, 28, of San Francisco, says it’s gone from a few hits in January 2011 to tens of thousands a month. “At first we thought it was going to be a joke site, but then people noticed and started to say, ‘This is my experience.’ ”

Another co-founder, Vancouver-based Grace (who goes by her first name or her intentionally androgynous cyber-alias, GTZ), says it’s fuelled in large part by the “separation of anonymity from consequence.” In other words, because most gamers opt for a made-up username, there are no lasting, real-life consequences for bad behaviour—no matter how repulsive. Grace says it’s not uncommon to receive snapshots of other players’ genitals, especially if the game has a text-message feature. And even though most gaming sites such as Xbox Live—which Papp identifies as one of the worst—encourage users to report discrimination, many argue it’s meaningless because anonymity shields the wrongdoer from any real embarrassment or shame, which prevents them from curbing their sexist ways.

York’s Jenson believes online gaming is one of the last places where unadulterated male chauvinism exists—the final frontier of boorishness—and anonymity definitely plays a part. “It’s an outlet for discourse and speech that has gone underground because we censor ourselves so much in daily life.”

So how to reconcile anonymity and consequence? Grace advocates technological solutions: a feature in voice chat, for example, that could enable a player to silence another for being crude. If that particular player is silenced a certain number of times, he could be banned from the game. The downside is that sexist gamers could use the technology to silence women instead.

Rosebaugh believes the sexualization of female characters reinforces the behaviour. Dead or Alive 5 is a hand-to-hand combat game that puts its buxom females in “fighter swimsuits” and allows players to choose outfits based on how high they want the breasts to bounce. “I think it has to be a societal change,” he says. “The gaming industry has always had this problem and they act like there is nothing that can be done.”

If the industry stopped objectifying female characters in games, men might be less inclined to objectify the women playing them. Daniel Stopnicki, a game art and animation teacher at Seneca College in Ontario, says his class used to be almost 100 per cent male, and now it’s about 80 per cent. “Women are not only making their way on the consumer side, but on the production side as well,” says Stopnicki. “Games will become much more inspired by the interests of females.”