What good is having a degree if I can't pretend to know about philosophy? 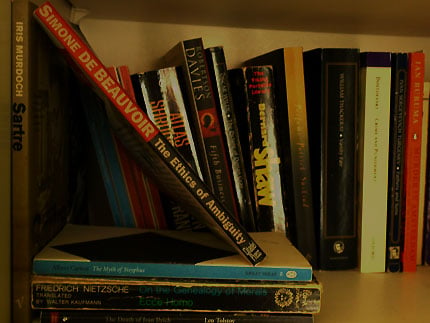 This September is the first one where I won’t be going back to school. I’m not sure how to feel when I see new students moving into my former residence (good old Pitman Hall) or when I hear about my friends going back for another year or starting their post-grad degrees. Mostly, I feel equal parts of envy and relief that I’m not in their shoes.

But I will be going back to school. Except instead of a student, I’ll be a (kind of ) teacher. Leaving behind being in an institution that you’ve grown to know, hate and love is terrifying and liberating. Sometimes I wonder when I’ll be able to break myself off from the formal education environment completely. Judging from the number of people I know who want to be teachers in the Canadian public school system, I’m not the only one with this issue.

Now that I’ve put in my four years and received my degree, there’s nothing keeping me in Toronto, or Canada. My friends (Canadian and international) are doing their own things at home or new places. After having spent so much time abroad in the last half year and now with school done, I feel like I don’t have a life in Toronto anymore. There are people and reminders of my old lives (university, high school, part-time jobs) everywhere but no real reason to stay or return for more than a visit. Finishing school isn’t so daunting compared to the overwhelming freedom of what to do next. Having a seemingly endless number of options of what to do with life is a middle-class privilege and a middle-class curse.

Recently I’ve had the urge to put on the French philosopher’s hat (or beret, if you will) for a moment and think back to the existentialism class I took in second year. Earlier this week I tried to re-read Simone de Beauvoir’s The Ethics of Ambiguity for some guidance (and to put me in the mood for France), but couldn’t get past the first few pages. Bringing myself to concentrate on actually reading something longer than 140 characters has been too much to ask of my brain recently.

A few days ago I received an email from a contact from my school telling me she had found me lodgings in Sélestat. Since I got back to Canada I’ve been furiously searching the French equivalents of Craigslist for places to live in Sélestat and Strasbourg. When I first found out I would be in Sélestat, I was dead set on commuting from Strasbourg. It took me a while but I’ve warmed up to the idea of living in Sélestat, or at least realized it’s an experience I haven’t had yet and something I should do. By the time I received the email, I was worn down to a 50-50 for both and going to make the decision in the 9 day period between when I got to France and started work.

It’s times like these that (what I remember from) de Beauvoir’s writing about fearing freedom really rings true. I’m still afraid of making a decision; I’d rather put it off until it’s made for me. I’m really relieved that I have somewhere to go and there is someone to pick me up from a train station, but also, I’m a little disappointed at myself for not sucking it up and making a choice. Granted, I still have the power to make a decision. I could accept or I could refuse the housing and look for something in Strasbourg–either way it feels better when you have a back-up to refuse. It seems I can’t decide whether the wait-and-see attitude is cowardly or practical, but then what else is new?