The Hamburgler turns himself in

Video: student breaks into McDonald's and makes a meal 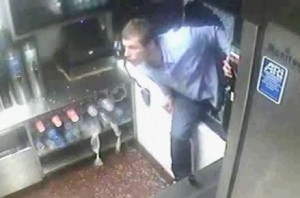 Capture from video by Cedar Falls Times on YouTube

Police in Cedar Falls, Iowa say a college student turned himself in after they appealed to the public to turn-in the real-life “Hamburgler” who broke into a McDonald’s in the wee hours of Nov. 20.

Footage obtained by the Cedar Falls Times shows 21-year-old Whitley Allen Teslow tapping on the drive-thru window before climbing into the closed restaurant, raiding the freezer and preparing his own hamburgers, fries and soda—which he consumes before exiting through the same drive-thru window. Needless to say, he was drunk.

Teslow was nicknamed the “hamburgler” by police who recognized the similarity to the cartoon character who used to steal children’s food in McDonald’s TV commercials, such as this one from 1984. Teslow is in jail. He’s been charged with third-degree burglary, which comes with a fine up to $7,500 dollars and up to five years in prison.