The most common disease among university students

Warning: pulling an all-nighter may cause Social Moronitis 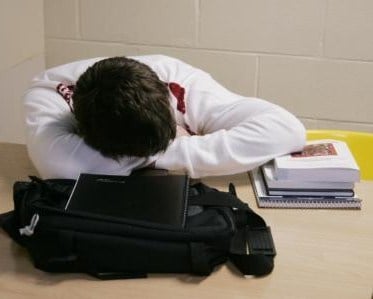 I had a little over two weeks to write the final lab report for my biochemistry course. It was the kind of assignment that seems relatively simple at first glance when you read over the outline. Meaning, the kind that’s tempting to leave on my desk for two weeks and finish at the last minute.

But the day before it was due, I realized the lab report had been hibernating in a cocoon on the corner of my desk and undergone a metamorphosis. Suddenly it included a bazillion graphs, charts, tables, figures, and in-depth analysis questions.

I stayed up the whole night and managed to finish the lab report on time, but there was a trade off: I had to spend every single last brain cell. For the next 24 hours, I was infected with Social Moronitis.

I spoke too loudly. I couldn’t hear so well. And I began to uncontrollably breathe through my mouth, exhaling too deeply. I lost the ability to make eye contact- instead, I had a weird, wandering soft focus.

As the day went on, I started to develop an annoying laugh. A couple hours later, I started giving people detailed descriptions of my dreams. I developed a sinus condition. And then I became convinced that people wanted to hear about it.

But I think I now understand why some people don’t have a sense of body space. They probably stayed up all night working on a lab report, and became infected with Social Moronitis. They can’t read facial cues from a normal distance, so they have to stand within three inches of someone’s face to tell if they’re happy, annoyed, or on the verge of beating the crap out of the person who’s now invading their body space.