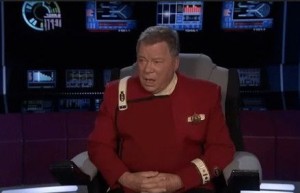 Shatner at the Academy Awards (abc.com)

1. Maclean’s Jessica Allen has captured the Oscars in 33 Tweets, but if you’re looking for an even shorter summary, here’s what people are talking about. Jennifer Lawrence, the 22-year-old lead in Silver Linings Playbook, got great reviews for her billowy Dior gown, but managed to trip in it while accepting her Best Actress award. Kristen Stewart, also 22, limped onto the stage to present an award—she’d apparently cut her foot on broken glass—and looked very Lindsay Lohan. Argo won Best Picture and Ben Affleck thanked Canada. Ang Lee won Best Director for Life of Pi and also thanked Canadians. William Shatner’s opening sketch predicting bad reviews for Family Guy creator Seth MacFarlane’s hosting turned out to be prescient. I thought he was funny but many criticized him today for his tasteless jokes. He did says says word “boobs” dozens of times, but at least he didn’t call 9-year-old Best Actress nominee Quvenzhané Wallis the c-word, which the satirical Onion did.

2. An attempt to impeach the president of the Commerce Society at Dalhousie University after he was found smoking marijuana in a hotel room at a Dal-hosted convention has failed, reports the Dalhousie Gazette. Unprofessional as it was, a majority of students are apparently willing to forgive.

3. Here’s a great gift idea for your depressed roommate on a budget. The Anti-Loneliness Ramen Bowl is a new form of dinnerware “that lets you place your iPhone at the perfect angle to watch videos or talk with friends over Skype and FaceTime,” explains Ishmael Daro on The Albatross. “Created by Japanese design firm MisoSoupDesign, these bowls are meant for the overlapping segment of a venn diagram for “nerdy” and “sad.” The company’s biggest mistake, however, is assuming that anyone who buys an iPhone-ready bowl has friends to talk to,” he writes.

4. A new company called NOMAD Housing says its goal is to supply Vancouver students with 100 square-foot two-story homes fully equipped with living rooms, bedrooms, bathrooms and kitchens, reports The Ubyssey. Although I’m skeptical they can make them that small, as graduate of the University of British Columbia who paid $800 for a basement, I know the demand is there.

5. Today is the beginning of the long-awaited Quebec education summit that the Parti Quebecois promised after months of anti-tuition protests. Maclean’s columnist Paul Wells has read the Quebec media and was “struck by a recurring theme in French-language commentary.” He’s talking about “the feats of ingenuity being expended to justify giving McGill University less public money.” Although student political groups will mostly be watching to see how little the Parti Quebecois government will make them pay—my guess is they’ll stick with the current $2,200 plus inflation—Wells points out that some academics see this as an opportunity to beat up on English universities.