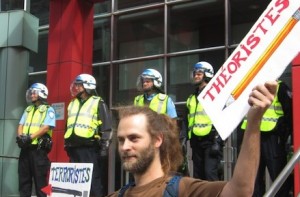 It’s hard to say who will be the winner in the ongoing struggle between the Quebec government and student activists–but there are already clear losers.

Last Tuesday marked 100 days of protest, and the list of casualties continues to grow: small and medium sized businesses in downtown Montreal are suffering, taxpayers are in for a hefty bill–now estimated to be in the millions of dollars–to pay for police overtime, and the tourism industry is fretting that the images of violence making their way into a growing number of international media will harm the city’s reputation just as high season begins.

From Vancouver to London, U.K., rioting youth has been lifting millions out of public coffers and private pockets. The Stanley Cup mayhem is estimated to have dinged Vancouverites for at least $5 million between damages and the cost of the investigating the riots itself. The the U.K.’s own spell of anarchy could cost Britons over $160 million in damages alone.

For Montrealers’ wallets, here’s what the bill looks like so far:

In the downtown area, business is down nearly 15 per cent on average due to traffic congestion and streets being closed due to ongoing protests, Michel Leblanc, president and CEO of the Montreal Chamber of Commerce,  told Maclean’s. Some downtown locales, though, are reporting a sales drop of as much as 60 per cent compared to this time last year, he added. “These would be the businesses that usually count on people staying in downtown after work or coming from the boroughs outside of downtown and they are more affected,” he says.

Some of these business owners, are now worried customers will get used to staying closer to home and continue to avoid the downtown core even after the protest ends. Others, like Luc Belisle, owner of Pub Quartier Latin, located steps away from trendy St. Denis St., are growing frustrated with news reports encouraging people to stay away from Montreal. Every day, at four o’clock in the afternoon, he’s in his office listening to the radio telling people to skip the city if they can. “I’m just thinking ‘You’re really trying to help me, huh?’, ” he says with an exasperated chuckle. Just today, a party of 75 cancelled a reservation for 5 p.m. tonight–a last minute decision he suspects was motivated by concern over nighttime unrest in the area. “People are afraid,” he says.

As of late April, the cost of calling on police to monitor the student protests was estimated at $2-3 million dollars, Yves Francoeur, president of Montreal’s police officers’ union, told Max Harrold of the Montreal Gazette. The intervention unit, specially trained in last-resort crowd dispersal techniques, has been called upon 150 times during the first eleven weeks of student protests alone.

And on May 14, Mayor Gérald Tremblay announced that 150 temporary police officers would be given full-time positions to deal with nightly protests. Tremblay is expected to try to recoup some of that by asking the Quebec government for $35 million in aid. With the protests still ongoing, however, those costs could climb even further.

“If you ask people, what’s your image of Montreal, right now, they think, social unrest,” says Andy Nulman, president of festivals and television at Just for Laughs. “To someone sitting in Wisconsin, that’s not far away from Syria.”

On Wednesday, the Hotel Association of Greater Montreal reported that reservations had dropped by as much as ten per cent compared to last year. “A few cancellations” have been directly linked to the protests, William Brown, the association’s executive vice-president, told the Gazette.

Tourism Montreal is also monitoring the situation. “I can’t see into the future, but right now, there’s no impact on tourists and there’s no significant impact on the image of Montreal outside Canada,” said Pierre Bellerose, vice president of public relations, research and product development at Tourism Montreal.

But if protests continue over the summer, it’s likely that as tensions and temperatures rise so will the cost.