The residence honeymoon is officially over!

How the hell are you going to get anything done in this place?

So, your adorable sweetheart of a roomie has turned out to be a total slob who turns on the lights when she comes home from partying at 2:00 a.m. The shared bathrooms have degenerated into shambles. A guy who lives down the hall spent his scholarship on a booming stereo and has terrible taste in music. Some other guy spent the entire last week sleeping on the couch in the lounge because he spilled water from his fish tank all over his mattress. (True story!) What you don’t know yet is that he’s going to be too lazy to put his bed back together and will sleep on the lounge couch for most of the semester.

Well, maybe it’s not that bad (yet) but the welcome parties are winding down and the excitement about meeting so many new people is wearing off. It’s becoming clear that not only are you going to have to live in this crowded place for the next two semesters, you’re actually going to have to read, work and think clearly.

How the hell are you going to survive? 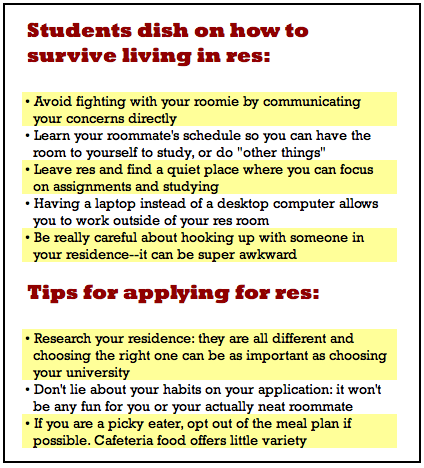 Some of it will just be a matter of adjustment. “You become good at sleeping through anything as a matter of necessity,” says Jesse, a graduate of the University of Alberta who lived next door to the guy who spent his scholarship on a stereo. “You get to know people really quickly and you become comfortable with sharing a bathroom.”

But it will also be a matter of discipline and strategy, particularly when it comes to studying and getting your assignments done. Residence can be an incredibly social place, which is great, until you have to get some work done.

“I realized pretty quick that I could not study in my room, so I would leave,” says Lizzy, a University of British Columbia student who is a four-year veteran of living in res and has spent two years as a residence advisor. “You can try to shut everyone out, but there’s a push on the floor for everyone to be involved in the community. If you have a hard time saying no to people, the easiest thing to do is leave.”

“For the first little while, I tried to tough it out, but it got harder to ignore the noise,” says Danielle, a St. Francis Xavier graduate who moved out of res after only one semester. “I put on music, but even that’s kind of distracting in itself, so I would go and find other places on campus like the library or the student union building — anywhere where there was a quiet desk.”

If you have a roommate, it’s even harder to work in your room. Having a laptop instead of a desktop computer can be a lifesaver if you have papers to write or computer-based assignments to complete, because it gives you the mobility to do the work elsewhere. If you need to work in your room, Lizzy recommends figuring out your roomie’s schedule and finding times when she has classes to study.

Sharing a tiny concrete box with another person isn’t easy, even at the best of times. It’s made even more difficult by the stress of midterms, and by the fact that many people lie about their habits on their residence applications, out of fear of being paired up with a messy or noisy roommate. “People lie all the time,” Lizzy says. “I lied. I fully lied. I was like, ‘I’m very neat.’”

When someone who lied about being very tidy gets paired with someone who told the truth, it can lead to conflicts. In Lizzy’s experience as an RA, however, no matter what sets it off, the root of a roommate conflict is bad communication.

“It’s always a communication breakdown. One hundred per cent of the time it’s because the two people are not communicating,” she says. “It’s a very awkward thing to address a lot of the time. Saying ‘I think that you’re messy’ — that’s kind of offensive,” but it’s important to deal with things head-on, instead of allowing conflicts to simmer.

If you can survive the crowding and the insanity, living in res can be great, so hang in there. It’s a place where you’ll be exposed to different people and different ideas, where you can make lifelong friends and grow as a person. The most important thing is to own your residence experience.

Jesse looks back on his two years in residence as a time of self-discovery.

“If you want to meet people and — I don’t want to just say have a good time, it’s more than having a good time,” Jesse says. “You get to figure out who you are in the context of other people.”

Do you have any tips on studying in res and not killing your roommate? What about hilarious stories about people getting kicked out of res for throwing a couch down the stairs? (True story.) Comment here or email us at the straightupguide@gmail.com