The university's war on the automobile

The new political cause on campus? More parking, please. 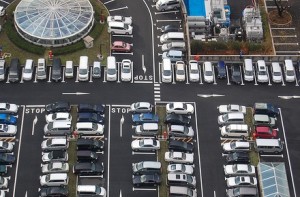 From the 21st Maclean’s University Rankings issue. Get your copy from newsstands now.

Watching Tommy Douglass on YouTube, one can’t help but recall Matthew Broderick’s legendary rendering of a spoiled but highly resourceful high school student in Ferris Bueller’s Day Off. Douglass, a fourth-year University of Regina student, has a boyish face and a sleek businessman’s attitude. And he’s on a mission: to redress his school’s parking woes. “Until now, I’ve never had a single complaint. I like my school . . . it’s ideal,” he says in one of several videos he’s used to draw attention to the issue. But, he adds, “we are seriously, seriously messing up parking.”

Against the backdrop of his student bedroom—complete with a laundry basket and a picture of a blond bikini babe tacked to the wall—he shows viewers two of three $65 tickets he recently received for parking in a staff lot. “I am not going to pay a single ticket,” he says defiantly. He’d gladly pay for one of the school’s parking permits, he adds, but the school has already run out.

With soaring prices (a permit at Toronto’s Ryerson University costs a whopping $1,017), and in many cases demand that far exceeds supply, parking lots have become the fault lines of a battle between commuters who say they can’t do away with their cars and university administrations trying to reduce traffic and pollution. And it’s not just a student problem. Earlier this year, Dan Middlemiss, a professor at Dalhousie University, quit his job of 30 years out of frustration with what he called a “ridiculous” parking situation. The Halifax campus has only 2,000 parking spaces for 20,000 students and staff.

Rochelle Owen, director of Dalhousie’s Office of Sustainability, hints that surface parking space at the university may well shrink even further. “With increasing growth in an urban area, where are you going to build? Probably on your parking lots,” she says. Her efforts are focused on promoting new bus routes and bike lanes, as well as better advertising existing carpooling options.

One school that seems to be getting it right is the University of British Columbia, where parking usage rates hover around 75 per cent (an eight-month parking permit costs around $640). It’s all part of the school’s strategy to encourage sustainability and become less of a commuter campus, says Joe Stott, the university’s director of campus and community planning. Over the past 15 years, UBC has slashed parking spaces from over 15,000 to 10,000, and used that space to build new residences and institutional buildings.

Back at the University of Regina, public outcry about a recent ticket fee hike and the school’s long-standing policy of selling 25 per cent more parking permits than there are spots, prompted president Vianne Timmons to ask students how they’d fix the system. “We’ve received some excellent suggestions,” says vice-president of external relations Barbara Pollock. One involved renting a nearby private parking lot, and establishing a shuttle service to connect it to campus.

But until solutions are implemented, warns Kent Peterson, president of the school’s students’ union, the current parking headaches will “almost certainly” affect high school students’ decisions to enroll at U of R.

The highs and lows of campus parking

TOP 10 Most expensive per year