Student recruitment in the information age

Sometimes, the best ideas are the simple ones 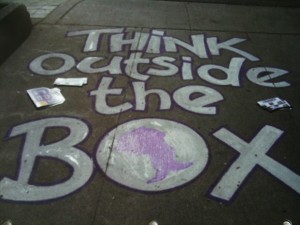 This week, I’m working on Bishop’s University’s new “teaser” piece for prospective students. It’s a booklet destined for distribution across the country. In some homes it will line the bottom of the birdcage, while other students will find exactly what they’re looking for buried in its pages. For years now, Bishop’s – along with every other school – has published this viewbook with the requisite smiling students, pictures of the campus, and pithy catchphrase. But, when you’ve got 95 universities across the country doing the same thing, how do you make your school stand out?

That brings us to the Internet. While some university homepages have sat stagnant for years, many schools have recognized the importance of online exposure. Companies like EDGE even design websites specifically aimed at student recruitment. EDGE’s “EZ-Recruit” is a top-selling product in use by schools such as University of Lethbridge and Acadia University for their “Future Student” portals. The result is a clean, bright portal that addresses the precise needs of prospective students.

EZ-Recruit also uses data provided by students to create targeted communications. Are you a student from Halifax, interested in biology? There’s an e-mail with your name on it, prepped and ready to be sent out. Targetting means that recruitment departments don’t have to send as many blanket communications. Each e-mail and message feels personalized, so that the student receives only the information pertinent to him or her.

Outside of packages like EZ-Recruit, the pickings are slim. For places that are supposedly hubs for research and development, most university websites aren’t terribly engaging. If you look south of the border, the opposite appears to be true. Oberlin and Bennington are two sites that work particularly well, making information available in a captivating manner. Australia’s Bond University even has a minute-long television ad extolling the virtues of attending that particular school. (Just in case living on the Gold Coast wasn’t motivation enough!)

Back to Bishop’s. While we won’t be releasing an award-winning television ad anytime soon, I’ve spent most of my day on the same sites you guys have: Facebook and YouTube. The difference being that it’s my job to overhaul our social media presence, and I’m getting paid for my Facebook/YouTube time. That’s because a little while ago, it dawned on universities that prospective students were spending a lot of time on Facebook, YouTube, Flickr, and other study distractions. So, why not go to where your audience is? Schools ran towards Facebook and YouTube, populating those two sites with content. Recognizing the trend, YouTube developed “YouTube EDU”, which helps educational institutions transform this into this.

With Facebook, targeted ads allow universities to get in front of potential students in a way they never could before. Is there a particular high school in Vancouver you’ve had multiple applications from this year? Why not give them a bit of a nudge during decision time, and purchase targeted ads in their high school network. The Internet opens up new avenues for targeting potential students that universities are still discovering.

Companies like Inigral and UTours are capitalizing on the push towards the Internet by creating content students are genuinely interested in, on platforms that are both visually attractive, and easy to navigate. In the case of Inigral, they’ve taken it one step further, integrating student information systems with Facebook, in a move that has been called frightening by some, revolutionary by others.

So is this viewbook I’m working on headed the way of the dinosaur? Eventually, yes. You can put more into a few minutes of video then you can into sixteen pages of text. There will always be course calendars and promo materials, but I think there will be a migration away from print, as universities begin to exploit text messaging, iPhone apps, and technologies yet to come. The early adopters will see increased enrolment, or at least increased applications. And the students? Well, they’ll have access to more information than ever before, arriving to them in a personalized and timely package.

While the future of student recruitment looks to be high-tech, there will always be great, low-tech ways to get attention. Last September, Bishop’s hired a chalk artist during the Toronto Student Life Expo. The artist sketched a huge graphic that read “Think Outside the Box”, encouraging students to consider their options outside of Ontario. It didn’t cost much, and it was incredibly effective. It just goes to show that sometimes… the best ideas are simple.