And it's a haven for racist, sexist trolls 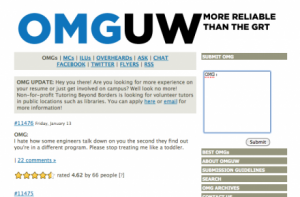 Facebook. Twitter. MSN. Google Plus. There’s no shortage of places for students to chat, opine, or procrastinate during finals. Yet there’s a new digital obsession spreading across Canadian campuses. It’s called OMG and it’s simple. Students submit short “Oh My Gods” about anything. Then, they’re posted to the site.

As a Waterloo student who found myself distracted by OMGUW far too often in December, I got thinking about what makes it so hard to look away. I wanted to know what makes it so enticing that it has spread from Waterloo to Guelph, Saskatchewan and Toronto, with tens of thousands of views.

To answer the question, I asked what makes the site different. After all, every successful social networking site offers something unique. Facebook is where you can keep in touch with old friends and archive drunken pictures of yourself. Google Plus is kind of the same thing, but circles reduce the likelihood that your grandmother will see your embarrassing photos. Twitter is a place where you can proclaim self-indulgent tidbits about what you’re thinking, as if anyone cares.

What OMG offers that all these other sites don’t is simple: anonymity in the crowd.

Sure, there have been plenty of cases over the years of students posting dumb stuff on social media, ranging from nursing students posing for pictures with a placenta, to TAs publicly complaining about how dumb their students are. But on OMG, you don’t have to worry about your employer or thesis adviser stumbling across inappropriate pictures or controversial words.

Naturally, this means many of the opinions expressed on OMG, especially in the comments section, can fall victim to the same type of lowlife mentality one might see on washroom stalls.

Although common OMG themes are benign—including students asking for advice on course selections, complaining about a nasty exam or rude students who were talking throughout a lecture—certain topics, like gender, race, and the engineering faculty, are minefields.

Consider how one OMG user unsympathetically responded to a woman who was harassed at a campus club. “Going to [the club] and you get your butt grabbed by someone on a crowded dance floor? Boo hooo, what did you expect? Are you surprised and upset? Shouldn’t be,” it reads. “…You are probably intoxicated too and should learn what happens when you go out to a club.”

That’s an attitude reminiscent of the Toronto Police Constable Michael Sanguinetti’s ignorant comment at York University last year, when he said that “women should avoid dressing like sluts in order not to be victimized.” That, of course, led to the worldwide SlutWalk movement.

Still, with the anonymity of OMGUW, more ignoramuses agreed with the original sexist poster. More than 80 comments flooded the post. A provocateur replied: “If you don’t want your ass grabbed at a sleazy drunken atmosphere, either come with some protection (as in, males), dress less openly, or accept that it comes with the territory.” Another cringe-worthy sexist poster wrote: “so don’t go out to a skank club and expect not to be assumed to be a skank.??sure, it’s a free country, go where you like. ??but don’t walk into a grocery store and be offended when someone offers you groceries.”

Less provocative, but still hotly debated, are the faculty-bashing OMGs. One OMG poster complained about how, “some engineers talk down on you the second they find out you’re in a different program. Please stop treating me like a toddler.”

This type of thread (yes, there are a few), usually devolves, with engineers suggesting they’re the only faculty that does any homework, to which arts students say engineers have no social skills, to which engineers respond that arts students will end up flipping hamburgers after graduation.

And if the sexism and faculty-hate wasn’t enough, OMG is also subject to that basic law of the web that people feel comfortable making racist jokes wherever they can comment anonymously.

“I feel kinda racist. I just made two asian friends. One was on purpose, and the other one was because I thought I was talking to the first one,” posted someone.

Did that draw the poster some laughs? Maybe. But it’s hurtful. That’s why they wouldn’t dare say it using their real name, where it could follow them to a job interview or grad school application.

But on OMGUW, they don’t have to worry.

And with controversy like that, it’s hard to look away.