There’s nothing political about stealing sneakers

Don't blame the U.K. riots on unemployment or tuition costs 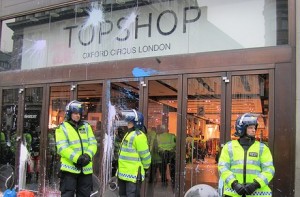 Eyes were on the Arab world earlier this year as waves of demonstrations catalyzed national revolutions. Civilians took to the street in revolt of brutal dictatorships, corrupt governments and the general lack of basic human rights. As protesters in the Middle East fought with their lives to achieve a better standard of living, there were those of us in the West—equipped with makeshift stop signs and a total lack of perspective—who dreamed that we would see our own Arab Spring. The way to overthrow a democratically elected government is civil disobedience, you see, and rogue acts the key to beginning the process.

And it seems those rogue acts are indeed underway, though not in Canada as a wistful Brigette DePape had once hoped. Rather, several cities in the UK have been set ablaze over the past several days as rioting has spread across England.

But in England, there’s no united cause or discernible reason. That doesn’t mean that explanations haven’t been offered. It started with protests in Tottenham after a man was killed by police nearly one week ago. But the violence has continued to spread.

While few pundits condone the acts of violence, many have offered their own socio-economic explanations.  Guardian journalist Stafford Scott says that the behaviour of the rioters should come as no surprise, since restlessness among British youth, especially in impoverished areas, has been provoked by widespread institutional racism, bitter job prospects, the rising cost of tuition and other barriers to education. Scott explains the destruction of property as simply symptomatic of the nihilism among British youth. “On Saturday, instead of imploding and turning inward and violent among themselves,” Scott writes, “the youths exploded.”

Another Guardian writer, Nina Power, is of a similar mind, suggesting that those condemning the acts of violence ought to look at the “bigger picture” of a country with a struggling economy, poor social mobility, and ever-widening gap between rich and poor.

The trouble is, this “bigger picture” is not on the minds of those committing the crimes. Rioters interviewed by the BBC have blamed everything and everyone from the police, to the government, “rich people,” and conservatives, and many—by their own admission—blame no one at all. There are videos of looters grabbing handfuls of clothes and shoes from broken windows, hooded men and women running from shops carrying away flat screen TVs, and one particularly abhorrent capture of a mob stealing a Sony PSP from an injured student on the street. There’s nothing political about stealing a Playstation from a bleeding man.

While there may be very real causes for social unrest in Britain, this recent destruction is not about politics, tuition or unemployment. Protesters who loathe corporatism and big business don’t torch mom-and-pop shops in their local neighbourhoods, nor do they claim to be “getting their taxes back” as they loot from local shops.

And many of the rioters, in fact, are not disadvantaged youth, but 30-something teachers, youth workers, and graphic designers. To ponder socio-economic excuses for these crimes is to give those who have succumbed to mob mentality a political agenda to fall back on. This civil disobedience is not about changing policy. It’s about a moral breakdown — and free sneakers.