The biggest class ever. Are universities ready?

Residences are full. Courses are too. Welcome to first year. 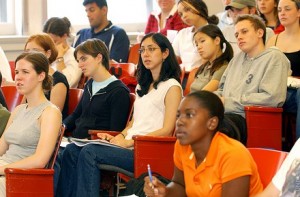 On your first day of class, you could find yourself scanning the room for an empty seat.

Are universities ready for the students?

Some schools have planned for the growth. Although they have 400 more students than they expected, McMaster University has added extra classes and created more study spaces to cope.

Thomas Chase, Provost and Vice-President (Academic) at University of Regina, told Maclean’s On Campus that Regina is ready too. He said that class sections are not expected to get any larger and that residences are expected to be nearly full, but no first-years have been turned away.

Things haven’t gone as smoothly elsewhere. The University of Guelph had to set up a deal with the local Best Western hotel to provide dozens of students with rooms after its residences filled up to capacity.  And although Carleton University opened the doors to its new residence building on Monday, the building will be under construction until at least the end of October. Many students who were promised a single room will find themselves with a roommate until the building is complete.

At the University of Alberta, some students complain that they are unable to enrol in mandatory classes after 300 extra students signed-up this year. There aren’t enough teachers to meet the demand.

But at least one school has a potential solution to the increase. Eric Bercier, of the University of Ottawa’s registrar’s office, said that his school raised admissions standards to cut down on the overwhelming number of applications it received this year. Even after hiring 250 new teachers in the past five years, there may not have been enough resources to go around. And so, they didn’t risk it.

Rudayna Bahubeshi is a fourth-year humanities student at Carleton University.