This professor connects language to emotions 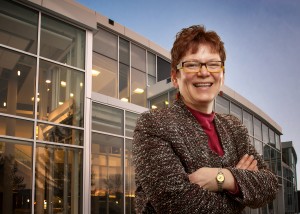 Kim Fordham Misfeldt, a professor of German and the Humanities Chair at the Augustana Campus of the University of Alberta, is a 3M National Teaching Fellowship recipient for 2013. Maclean’s On Campus is profiling all 10 recipients.

As an undergraduate student at the University of Saskatchewan, Kim Fordham Misfeldt dabbled in French, German and Norwegian. But is wasn’t until she taught her first German class as a master’s student that she witnessed the transformative effect learning a foreign language could have on a student. She has not stopped teaching since.

While many language instructors don’t stray too far from the textbook, Misfeldt, a professor of German and chair of the humanities department at the University of Alberta’s Augustana campus, encourages her students to get up from their desks and converse casually with each other.

Stewart Prest, a doctoral candidate in political science at the University of British Columbia, says Misfeldt’s engaging approach inspired him to pursue German as an undergrad. He originally signed up for the class to fulfill a second-language requirement, but went on to study German for three years. He even taught English in Germany for a year.

“I think Kim’s greatest strength is that she is a wonderful listener,” he says. “She doesn’t just teach you standard grammar and vocabulary, she makes the point of getting to know you and learning what you might actually want to say in German.”

Misfeldt says a number of her students have gone on to teach or study in Germany, and for many, the language has taken their lives and careers in unexpected directions. She remembers teaching one student, an unapologetic jock, who connected to the language so strongly that he became fluent. He now coaches hockey players in Germany.

For Emma Tunney, German is more than just a tool. The University of Alberta student, in her fourth year of a degree in political science and German, has gone on Misfeldt’s immersive summer program in Germany for the past two years. In her second summer, while writing an essay on a German novel, she experienced what she describes as a “German emotion.”

“It’s difficult to explain, but I was thinking about the assignment and what I wanted to write and I had a distinct feeling I knew I could only express, and only wanted to express, in German,” she says.  The experience was so inspiring, Tunney will return for her third time this year. She may consider teaching in the future and, if she does, she will “absolutely” be following Misfeldt’s example.