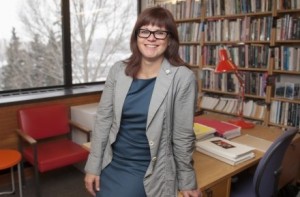 Heather Zwicker, a professor of English and Film Studies turned Vice-Dean of Arts at the University of Alberta, is a 3M National Teaching Fellowship recipient for 2013. Maclean’s On Campus is profiling all 10 in the coming weeks.

It was 2003 and Zwicker had taken a six-month teaching position in Hawaii when it dawned on her that she knew more about the culture of Honolulu than that of her hometown Edmonton.

When she got back to the University of Alberta, she put together a senior-level course that focused on the city’s history and arts scene.
It was difficult at first, because there weren’t many published works about Edmonton.

“That’s when I realized that the other part of the course had to be getting students into the city,” she says. She had them tour the campus, taking in the history of the university, and go for walks and transit rides, recording everything they noticed. Based on their observations, they created unique maps of the city using soundscapes and video. “It was really fantastic. The students’ work was amazing,” she says, adding one project was submitted to a film festival.

Along the way, they uncovered unique facts about Edmonton, home to the oldest mosque in Canada. One student interviewed the last surviving member of the Edmonton Grads women’s basketball team — which played more than 400 official games between 1915 and 1940 and lost only 20.

“I get students who discover this and they feel like suddenly there’s this community with deep, deep roots.” Zwicker’s teaching philosophy is to push students out of their comfort zone. “I think if you’re doing it right, teaching and learning are dangerous and unsettling,” she says with a laugh.

Former student Erika Luckert found a weekly blogging assignment both tough and fulfilling. “Every week you were pushed to come up with something new to say. But it was also a really interesting way to catalogue learning throughout the whole course as opposed to trying to sum it all up in one paper at the end,” she says.

Luckert also enjoyed reading hyper-local stories and poems. “To be reading about your own city was a really interesting experience.”

The 3M fellowship comes at the beginning of a new chapter for Zwicker, who recently gave up her teaching duties to be vice-dean of arts. She misses it all the time, but “it’s important to have people who care about teaching in decision-making positions.”

Luckert, for her part, continues to seek advice from her mentor. “I think the best teachers are the ones who don’t stop teaching when they leave the classroom.”