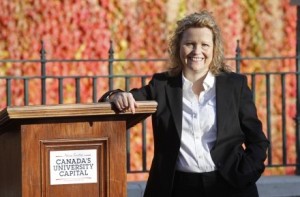 Shelagh Crooks, who teaches philosophy and education at Saint Mary’s University, is a 3M National Teaching Fellowship recipient for 2013. Maclean’s On Campus is profiling all 10.

When Shelagh Crooks started teaching first-year philosophy students, she’d give them something to read and then ask, “what did you think?” She was expecting them to defend the author’s position, refute it, or identify passages that confused them. Instead she got mostly blank stares.

Years later Crooks is an expert at teaching students to read critically, a skill she shares informally with her peers at Saint Mary’s University and in formal lectures elsewhere. She says critical thinking isn’t learned through osmosis, but must be taught. “I kind of see it as like teaching a second language,” she says, “it’s a brand new way of looking at the world through evaluation of claims.”

One method she uses is to have her class evaluate written work together. As an example of good writing, she uses the text of an interview given by a Nobel Prize winning AIDS researcher who argues that HIV is not the cause of AIDS, but merely a concomitant factor. What she likes is the nuance of his argument. He says things like, “it would be wrong for me to say I know this.” Passages she uses as examples of bad work are those that seem well-written and have proper grammar, but lack evidence. “There are plenty of examples in the newspaper any given day,” she says.

But before Crooks can help students learn to read and think critically, she says she must change their attitudes. “They see themselves as consumers of information and not people who can intellectually interact,” she explains. “They’ve been trained that the measure of your worth as a student is the amount of information you’ve memorized.” She fixes this by emphasizing that while the author is an expert, the reader is allowed a different view if they can offer better evidence.

Changing their attitudes requires trust—something she views as an ingredient of good teaching. Crooks has observed that teachers who are too serious are less effective. She gives the example of an instructor she once saw move chairs apart ahead of a midterm because she was worried students would cheat. “Right away that’s bad chemistry,” she says. Students mustn’t feel intimidated.

Crooks stresses that her mission isn’t just to teach critical thinking to students, but also to help build a community of professors dedicated to teaching better. “I think one of the misconceptions about this 3M is that it’s an award, but it isn’t really,” she says. “You become a fellow—part of a group of people who are dedicated to good teaching,” she says. Crooks should fit in just fine.