This teacher is a screamer

Looking for a career where you can rock out in the summer? 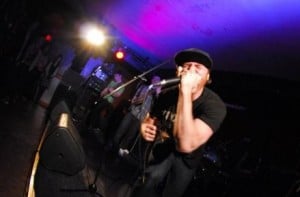 Some students in Hamilton may surprised to learn what their high school art teacher, Mr. Matt D’Alvise, does when school’s out for summer.

“He’s a screamer,” explains grade ten student David. As in, he’s the lead vocalist of Mojave Bloom. The group, which defines itself as a “metalcore/hard rock” band, has been performing for the past six months now, with eight shows under its belt, and six more this summer.

D’Alvise proves that you can be a teacher and still be cool. He also shows how teaching is a great job for rockers, because they can tour in the summer. Interestingly, he’s not the only teacher who does this. Lethbridge University prof Paul Lawton is also a hardcore musician, and the music of Carol Ann Weaver, Associate Professor of Music at the University of Waterloo, has been heard throughout North America, Europe, Africa, and Korea.

“When I first show my music to my students, they are quite shocked,” admits D’Alvise, the group’s vocalist. It’s not often you get to hear a recording of your teacher’s band, let alone one where the teacher is screaming like I do.”

D’Alvise started off as a drummer when, at 12, his parents bought him his first drum kit. “I had to play on a rubber practice pad for almost a year to prove to them I was willing to stick with it,” explains D’Alvise. “After that first year they gave me my first kit and I have never looked back.”

D’Alvise played with a few different bands in high school. Then, after graduatio, he got into underground hip hop — heavily. This led to forming a hip hop group called “The Illiterate Crew,” which released the album Audioperosis in 2006. When the band broke up, D’Alvise started playing guitar for the Robert Desmond Band, which led to a 64 day tour of the Philippines.

“It turned out to be an amazing experience. We played 20 shows, including live performances on popular television and radio stations.”

A few years later in 2008, D’Alvise left the band and went to London, England for teachers college, but he didn’t stray too far from music.  “While I was in England I began slowly getting back into heavy metal, which was a huge culture of it’s own across the pond.”

So how does a public school teacher combine his love for music with a teaching career?

“I find that teaching is a great way for me to stay connected with my artistic side,” says D’Alvise, who describes his band’s sound as “raw.” But it’s obvious that music is more than just a summer gig for this teacher. For D’Alvise, music truly is his passion. When asked about the band’s first performance, at a club in the Hamilton area, D’Alvise says,  “To be completely honest, we stole the show!”