First a Falcon, then an inmate...now an Eagle? 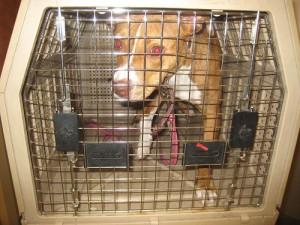 Michael Vick was signed by the Eagles last week, and I am thoroughly disgusted.

A little about our humble hero: Vick was once the highest paid player in the NFL; a star quarterback who flaunted million-dollar endorsement deals with Coca-Cola, Nike, EA Sports, Kraft Foods and Hasbro, just to name a few. Vick played for the Atlanta Falcons for 6 seasons before trading in his jersey for prison garb.

In August 2007, Vick was convicted of running a dogfighting ring, the Bad Newz Kennels (someone call Mensa; I have a new candidate). The ring was “home” to over 70 dogs who were forced to brutally attack each other for the primitive enjoyment and frivolous wagers of their onlookers. The underperformers would be executed, and in no simple way. A typical “disposal” was much too modest for Vick and his boorish chums. No, his dogs were drowned. Some were hung from trees. Others were doused in water, then electrocuted. One even showed signs of being repeatedly hurled towards the ground.  What a fabulous game for the feeble-minded! Funny, when I was a camp counselor I told my four-year-old camper that the ants he was stomping on had mommies. He stopped immediately.

Michael “Victim” spent 18 months in prison and lost all of his endorsement deals. He filed for bankruptcy protection last July (someone living a little too large?) listing assets of about $16 million and debts of more than $20 million. This, coming from a guy who signed a 10-year, $130 million contract with the Falcons in 2004. Maybe Victim should have paid for an accountant, along with his bait animals, fancy cars and confused lawyer who first advised him to make this public statement…and then plead guilty:

“Today in court I pleaded innocent to the allegations made against me. I take the charges very seriously, and I look forward to clearing my good name. I respectfully ask all of you to hold your judgment until all of the facts are shown. Above all, I’d like to say to my mom I’m sorry for what she has had to go through in this most trying of times.”

Someone having a little trouble deciding which way is up, huh?

Nevertheless, Vick has now signed a two-year deal with the Philadelphia Eagles, earning a pitiful $1.6 million his first year. Clearly, some people out there think he’ll still make them some money.

Victim was recently interviewed by 60 Minutes, where he read from the teleprompter said he should have stopped his illegal dogfighting operation. He feels “some tremendous hurt behind what happened,” and needed to take “the initiative to stop it all.” Vick now pledges to be a crusader for animal rights.

Is it just me, or is that like a sexual predator boasting a national womens’ shelter speaking tour?

Before you can ask—yes, I believe he’s been punished enough. Yes, he deserves a second chance. Yes, he was hired to play football, and no, I don’t care if he’s changed.

Vick deserves a second chance—that’s why he’s out of jail. But he shouldn’t be back on the field. When he’s in uniform he’s a role model, whether he wants to be or not. We don’t need another bad one.

In any case, Vick is with the Eagles. I would just advise the team to change their name to something inanimate so Vick doesn’t get the urge to charge up those electrocution cables. And hopefully, the Snoop Dogg and Baha Men songs played in the stadium during timeouts won’t be too off-putting.

Good luck to our Vicktorian Bulldog. I hope he gets a warm Philly reception.