What students are talking about today (March 1st) 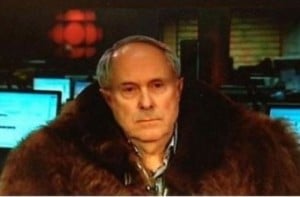 Flanagan on CBC's Power and Politics

1.  Tom Flanagan, a soon-to-be former professor at the University of Calgary and a noted conservative strategist, has been lambasted for questioning the illegality of viewing child porn, which he originally did in an interview with The Manitoban in 2009 and again when asked about it at a lecture in Lethbridge on Wednesday. Practically every politician who ever worked with the guy was tripping over another to distance himself or herself from the comments on Thursday. Part of what he said was this: “I certainly have no sympathy for child molester, but I do have some grave doubts about putting people in jail for their taste in pictures.” On Thurday he apologized, but the damage was done. Still, one brave student columnist, Travis Gordon of The Cadre at the University of Prince Edward Island, wants people to calm down a bit and consider Flanagan’s academic freedom. “My question is this: Why was a professor retired for voicing an unpopular opinion in an academic setting?  Further, why did students not challenge Flanagan’s thinking intelligently?  Why instead did they boo him and call him disgusting? Has academic discourse in Canada rescinded into simple, guttural responses?”

2. Speaking of crossing the line on campus, a Master of Fine Art student at New York’s School of Visual Arts had his artwork Take This Sperm and Be Free of Me seized by the school for safety reasons. Marc Bradley Johnson’s project was a refrigerator loaded with 68 vials of his own semen and a Craigslist ad telling the public that anyone could walk in and take some. It was about “creation, parenting, desire, masculinity, fantasy, and reality,” he told the Daily Intelligencer. His professors were fine with the project. College officials, however, expressed concerns about the bio-hazard after finding out. What a savvy, though thoroughly disgusting, publicity stunt.

3. A student in an arts course at the University of the Fraser Valley pulled a fake gun out of his pocket in the middle of a class where they were discussing gender. He was offering it as an example of a “boy toy.” According to an unnamed witness, the professor immediately announced a break for the class. As The Cascade student newspaper points out, “even a fake one can be a cause for alarm.” After so many school shootings, that’s certainly true. So why so many American states still debating whether real guns should be allowed on campuses?

4. There are few cult classics more classic than the Coen brothers’ 1998 film The Big Lewbowski. Students in Winnipeg are getting ready for Saturday’s Lebowskipalooza festival, the biggest (only?) festival of its kind in Canada. The Uniter student newspaper reports there will be Lebowski-inspired games, White Russians (protagonist ‘The Dude’s’ drink of choice) and, of course, a screening.