Too fat for the team 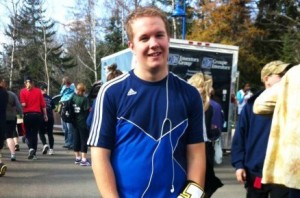 This story originally appeared in The Aquinian, the student newspaper at St. Thomas University.

In high school, I was a typical big guy. I took a lot of shit from people. I got teased and laughed at. Girls wouldn’t talk to me. I could never eat enough, and I never felt good about myself.

There was one thing did make me happy, though, and that was hockey. I loved hockey in high school, but couldn’t make the high level teams because of my weight. During AAA tryouts one year, the coach called me. He wanted to tell me I was a fantastic goalie and had the heart of a champion.

He followed up the pep talk by saying I was “too fat to present the image we want on this team.”

It was crystal clear I could stop a puck better than the other goalies, but because I was overweight I was somehow not good enough as the skinny guys.

I came close to my wit’s end after practice one day. I went to shower in the dressing room when I got off the ice. Five or six other players started whipping me with a wet towel because the way I jiggled was humorous to them. One time, they beat me down and slapped me all over my stomach.

I’m still thankful the coach walked in and stopped it. After that, I was always late for class, because I chose to race home to shower rather than rinse off with the other guys after practice.

After hockey, my second love was rugby. I couldn’t last more than five minutes on the field in high school.

My first few years were played under captains who were unsympathetic towards my situation. One practice we were doing sprints and I was so slow that the captain stopped the entire team and screamed at me until I did an extra few lengths of the field. He then encouraged the team to laugh at me as I stumbled back out of breathe and covered in my own tears.

One of the captains walked up to me as I was on the ground gasping for air. He slapped me across the face. The coaches looked the other way because he was the star player, and they needed him more. Nothing was ever done about that.

Things went on like this for a while. I was depressed. When I felt sad, I would grab a pie, a jug of chocolate milk, and some McDonalds on the way home from work. Like many depressed teens, I made attempts on my life.

I soon weighed well over 300 pounds. Then I stopped weighing myself. I had no inner strength to convince myself to go for a jog or better myself in any way.

One night I was at my best friend’s place a few blocks from my house. I had no way home so I was forced to walk. I stumbled into my driveway drenched in sweat and passed out on my front doorstep. I kept remembering the moment when the doctor told me that if I didn’t have major heart problems before my twentieth birthday, he’d be shocked. I couldn’t do this anymore.

The next day I went for a two minute jog. I didn’t make it two minutes. In fact, I couldn’t do it on day two or three. Day four, I finally jogged for two minutes and finished with my arms in the air like Rocky Balboa. Soon enough I worked myself up to four minutes, then five, then ten, and after a few weeks I had actually dropped a pound or two.

I decided one day to jog the main streets in my hometown to switch things up. A couple metres into my jog, a blue Honda Civic pulled up. Some teenagers stuck their heads out and screamed, “FATTY CAN’T RUN!” They laughed at me until my mp3 player drowned them out. I cried a little bit as I dragged my 320 pound self back up to my house, grabbed a Pepsi,and a few cheeseburgers, and went to my room.

A few days later I smartened up. I decided to run at night time for cover of darkness. I cranked my music, ignored all traffic, and started running every Monday night. The weight started coming off. I would put on sports movies and work out in my basement. I started dieting.

The work finally paid off as four months later I was down to 250 pounds. I made up my mind to try out for the Fredericton Loyalists, the maritime rugby champions. I ended up on their B-side and I’ll never forget the day I played my first 80-minute game. It was insane to think I once couldn’t make two minutes on the field. Somehow I did it. I wasn’t the best player, but I’d earned my spot.

I ran more and more and found myself down to about 240 pounds a few years later. Like anybody, I had my binges and heartbreaks that made me just want to eat. I had my lazy moments. But I also had power and a sense of hope.

I came to St. Thomas University for my second year of university weighing 235 pounds, and once again I set a goal for myself. I wanted to try out for the cross country team. I wasn’t a gifted runner and originally it took me half an hour to do five kilometres. The guys on the team could all do it in less than 20, and that’s absolutely insane from my point of view. I didn’t join at first because I didn’t want to get in their way.

One day I ran into the team captain. He convinced me my speed wouldn’t matter and that I should join regardless of how I matched up to others. So I did. I spent this fall meeting awesome people, even though I didn’t get to run any races, and everyone lapped me eight times during each of our team runs. By the end of the season, I was finally down to 220. One hundred pounds gone!

I know how hard it is to keep on going. There are many reasons I could have given up, but I never would have realized my true potential. Maybe I’m this way because I idolize people like Terry Fox, Rocky, and Herb Brooks. I wish I could tell that 320 pound kid he had a future ahead of him, but I can’t. When I was being bullied in the halls and laughed at by strangers, I didn’t think I would be on a university cross-country team, refereeing rugby at an elite level, and looking at myself in the mirror 100 pounds lighter.