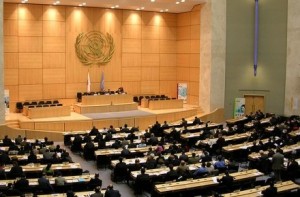 United Nations in Geneva by lilivanilli/Flickr

The United Nations High Commissioner for Human Rights included criticism for Quebec’s Bill 78 in the annual report she gave to the UN Human Rights Council on Monday in Geneva, Switzerland.

Bill 78, the emergency law passed by Quebec’s government on May 18, was meant to quell months of student protests that prevented many students from attending classes and led to vandalism of businesses in Montreal.

The law is being challenged in court in part because it requires those planning protests of 50 or more people to provide detailed itineraries to police at least eight hours beforehand.

This was Pillay’s focus. “Moves to restrict freedom of assembly in many parts of the world are alarming,” she said. “In the context of student protests, I am disappointed by the new legislation passed in Quebec that restricts their rights to freedom of association and of peaceful assembly.”

Hillel Neuer, from UN Watch, said Pillay should “keep things in perspective.” He said it’s wrong to criticize Canada without mention of worse offenders: “When a prosecutor goes after jaywalkers while allowing rapists and murderers to roam free, that’s not only illogical, but immoral,” he said.

“Quebec’s Bill 78 was adopted by an elected democracy and will now be scrutinized by a series of independent courts applying the world’s finest machinery for reviewing legislation according to constitutional human rights guarantees,” Neuer added.

“Meanwhile, most of the world’s worst abuses—like those Pillay fails to cite in the police states of Belarus and Cuba, and in the misogynistic regimes of Iran and Saudi Arabia—are devoid of any scrutiny. Those are the ones that desperately require the UN’s attention,” he added.