Artificial turf to be revisited in 10 years 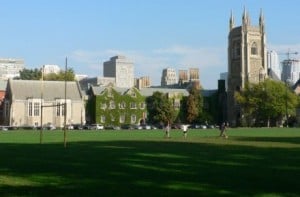 After debating all day, Toronto’s city council voted 31 to 12 against designating a natural grass field at the University of Toronto as a cultural heritage landscape. That means the installation of artificial turf will go ahead in July.

However, a small compromise was reached. There will be a formal assessment of the project in 10 years.

The decision to install the turf was made in 2012 after two years of debate at the University of Toronto’s Council of Athletics and Recreation (CAR).

The plan for an artificial field was mentioned as early as 2009 when the province put forward its bid for the Pan Am/Parapan Am Games, which require fake grass for field hockey and para soccer.

It seemed like a done deal, but then a who’s who of influential Canadians—former Governor General Adrienne Clarkson, author Margaret Atwood and historians Margaret MacMillan and Michael Bliss—banded together with University of Toronto professors and student groups who were determined to stop the change. A petition on Change.Org with more than 5,200 signatures says the field, “has historical value as a campus common, used by both students and the general public as a sports field, and for casual recreation since the founding of University College.”

Left-leaning councillor Adam Vaughan took up the issue at the city’s preservation board last month, which sent it to council. Vaughan spoke in favour of keeping the grass.

Last week, graduate student and CAR member Jason Lacombe outlined in in The Toronto Star some of the reasons he supported the plan:

Once these Games are over, these world-class facilities will be open to the public and all students at the university. There will be no new lights, tall fences or inflatable domes impacting any historical views. The current grass fields do not provide a viable year-round venue for students; having synthetic turf in place of grass will allow intramural sports and varsity athletics to be played into the winter. In fact, the planned synthetic fields will increase usage time by almost 300 per cent.

Scott Mabury, U of T’s vice-president of university operations, vowed Monday to send the City of Toronto a bill of more than $12-million, the cost of moving the turf, if councillors blocked the plan.

Joe Pennachetti, the city manager, recommended to council Wednesday that the field go ahead. He said stopping it would have negative impacts for intergovernmental relations as it was approved by the university and the province. He told council there existed a “possibility” of legal liability.

Councillors discussed alternatives, whether there was appropriate consultation, the potential legal liability and potential precedents of giving grass a heritage designation. Right-leaning councillors Giorgio Mammoliti and Doug Ford made clear that they believed city council had more important things to debate. It was an amended motion by councillor Shelley Carroll that passed.

Students and community members Tweeted their opinions throughout the debate:

As someone who took a lot of naps on UofT’s back campus in between classes – I hope they keep the grass. #TOpoli

#UofT has been walking all over the City re: development. Back Campus is no different. #topoli #TOcouncil — Brad Evoy (@Brad_Evoy) June 12, 2013

Full disclosure: as a current UofT student, I’m not totally sure what’s wrong with turfing the back campus. #topoli

I’m a UofT Alumna who used to play on the Back Campus & I don’t want it turned into astroturf. That good enough for you, Mammolitti? — Kath Halloran (@lifeonqueen) June 12, 2013