Toronto’s G20 summit: a failure all around

There are several ways one could have gone about making a point regarding this weekend’s G20 summit in Toronto. Some opted to break windows and throw feces—not so subtle. Others selected arson as their method of choice—a brilliant (excuse the pun) way to illuminate (excuse again) their serious socio-economic concerns. But the majority chose “peaceful protest.” They gathered at Queen’s Park, chanted and held signs, and marched through the streets of Toronto, calling for free tuition, reduced greenhouse gas emissions, and, most collectively, for G20 leaders to go home.

Yet to me, the futility was obvious. Don’t get me wrong; I recognize the value of the right to protest. And I, too, was outraged at the $1 billion security bill, the evacuation of University of Toronto residences, the security fence and “fake lake.” But a protest—peaceful or otherwise—was not, in this case, an effective way to call attention to frivolous G20 measures. If everyone, and I mean everyone, had stayed home drinking tea on Saturday and Sunday, the message would have been way more effective (there’s that word again) than 10,000 protesters taking to the street. What better way to “humiliate the apparatus” (to borrow a phrase from the anarchists) than to really demonstrate the uselessness of a billion dollar security fleet? 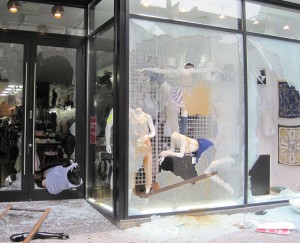 Of course, no such concerted effort was made. While protesters spent time dousing their handkerchiefs in vinegar and silkscreening “F*** the G20” on their brightly-coloured tees, the effectiveness of a strategic, silent protest seemed to evade most of the outraged. I should apologize, though—I haven’t completely shaken the youthful naïveté that a protest should be about actually getting something done. But I’m working on it. After all, this weekend confirmed—at least to me—that demonstrations are more about hearing yourself than actually being heard.

– –
On Saturday afternoon, I went to check out the Canadian Federation of Student’s Student Feeder March. Like an idiot, I thought the march was to demonstrate Canadian students’ objection to the G20 summit, specifically regarding the evacuation of U of T’s downtown campus. Obviously I’m new, because I was surprised when I was treated to a megaphone lecture about Indigenous rights, Stephen Harper’s maternal health plan, and the evils of corporate America.  After the obligatory “Education is a Right!” chant and a few dozen “Shame!’s,” we were off. 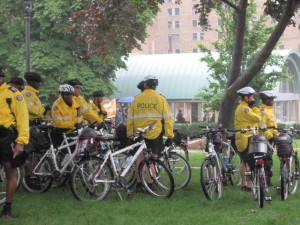 The group marched through the spitting rain, east from Bloor and Spadina towards the desolate U of T campus. There were a few hundred students, and no police escort. Despite the grey skies and murky ground runoff, energy was high. The chanting was constant (and, I’ll admit, quite catchy). As students turned onto U of T’s closed campus they got louder. “Whose streets? Our streets! Whose streets? OUR STREETS!” Followed by, “This is what democracy looks like!” which evolved into a confusing “This is what democracy smells like!” And, of course, it wouldn’t be a student march without, “We gotta beat, back, the corporate attack.”

When I was in Grade Six I learned about the standard, five-paragraph argumentative essay. “You need a thesis,” said my teacher from front of the elementary school classroom. “One point that you will argue,” she continued. “The rest of the essay will support this point.”

Could you have two theses, I wondered? Three? Four?  Like most eager 11-year-olds, I wanted to impress my teacher. “Just one,” Ms. Levitt reminded the class. “A focused argument will always be stronger.” 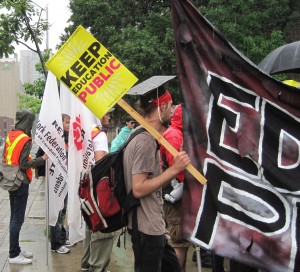 The CFS placards on Saturday afternoon read, “Keep Education Public!” But to the uniformed bystander, the group could have been marching about anything. Native land rights? Corporate greed? A woman’s right to choose? While marchers took great pride in reminding spectators that, “The people, united, will never be defeated,” they really should have kept in mind that a message, diluted, is not properly entreated. (See? I can rhyme too!)

It just got worse when we reached Queen’s Park, the designated protest site. I saw signs about occupation in India, a group for animal liberation, and a slew of unionized men and women advocating for workers’ rights. Okay, I get it; I saw the “Long Live Socialism” sign. The idea was undoubtedly to highlight the causes that could have done with some diverted G20 cash. But as long as protesters were present, there needed to be police. And when store windows were crashed, riot cops had to be brought in. The Toronto Transit Commission lost revenue because of afternoon system closures and someone’s gonna have to pay for that damaged public property.

I’m not saying we should be silent on the issues that matter most. But ironically, silence might have been the way to go on this most important matter. Imagine how silly it would have looked if the feds spent a billion dollars on riot gear, bringing in the RCMP, army, private security and swarms of police on bikes, motorcycles, and horseback, and the downtown core turned out to be empty as air. The Black Bloc certainly made things worse for everyone, but even the “peaceful protesters” weren’t really helping their cause. 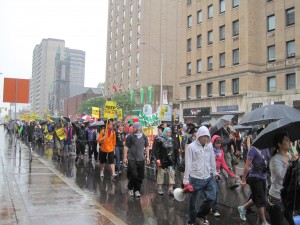 I would hope students, as the “bright thinkers of tomorrow” would lead the way by initiating constructive means of protest. Or, at the very least, come with a focused, coherent message. I wasn’t beaming with pride when I spotted student leaders amid a mob standoff with riot police, nor was I pleased to accompany a student march rallying for a mess of different causes, only some of which I supported.

Police certainly overreacted, peaceful protesters were detained, media was arrested, and rioters wreaked havoc. So, until next time, G20, I’ll be drinking my tea.