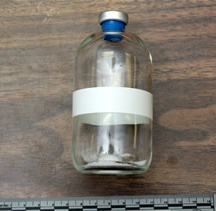 Waterloo police say they are searching for 10 vials of an “extremely poisonous” substance that were stolen from a group of university researchers who were conducting water test studies last Saturday morning.

Students were conducting water tests at Moyer’s Landing Park along the Grand River in Cambridge, Ont. when they noticed that multiple vials of sodium azide had been taken from a cooler at the research site, according to the city’s regional police.

The stolen goods are described as a clear liquid inside clear glass vials with vacuum sealed tops. (See picture.) Each vial contains about 160 mL of the chemical, which is extremely poisonous and can cause death if touched, breathed in, ingested or injected. It could also explode if poured down a sink.

According to the Ontario Poison Centre, if the sodium azide comes into contact with certain metals, it can also create pungent, noxious fumes that can cause death. Symptoms include low blood pressure, diarrhea, vomiting, chest pain, heart rhythm problems, shortness of breath, seizures and acute heart attacks.

Exposure can be fatal if left untreated.