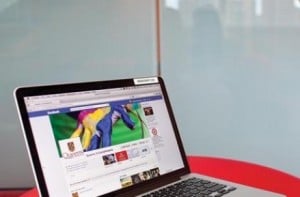 One in three anglophone Canadians won’t let a single day go by without checking into their social media feeds, suggests a new report by the Media Technology Monitor.

The report is based on telephone surveys with 4,001 anglophone Canadians in the fall and found almost seven in 10 Internet users declared they were regular social media users, logging on at least once a month. That figure was up by about six per cent compared to 2011.

Those growing numbers didn’t surprise Aimée Morrison, an associate professor at the University of Waterloo, who researches digital culture.

“It’s becoming a mainstream part of how we get the business of life accomplished and you’re at a disadvantage increasingly if you don’t do it,” says Morrison.

About 63 per cent of social media users surveyed said they read Facebook posts, tweets and/or LinkedIn updates every single day.

Facebook remains far and away the most popular social network. About 63 per cent of surveyed Internet users and 93 per cent of social media users said they’re on Facebook.

While Twitter gets a lot of media hype and is growing rapidly it’s not all that commonly used in Canada, according to MTM’s numbers.

Less than one in five Internet users surveyed said they were on Twitter in the last month, although those numbers had grown by 80 per cent in a year, up from just 10 per cent in 2011.

“Probably in the press it looks like more people are on Twitter than actually are on Twitter,” said Morrison, who noted the stats were in line with usage of the social network among her graduate students.

“They didn’t think it was relevant to them or some had concerns about privacy or the exposure they might face as young workers…. They were worried it might be held against them if they did it wrong.”

Morrison pointed out that it can be difficult for new users “to know the right way to use Twitter and therefore it can be more alienating than something like Facebook.”

The business-oriented social network LinkedIn had similar usage numbers, although it grew slower since 2011. About 12 per cent of Internet users said they used it at least once a month in 2011 and the figure was up to 18 per cent in 2012.

“It’s a lot of work to do LinkedIn well, I imagine there’s a lot of begun and abandoned (accounts),” Morrison said.

“If you join because you think you’re supposed to but you don’t have a burning need that you’re trying to fulfil it’s pretty easy to give up before you get to that point where you start to see returns on investment in time and effort.”

Only seven per cent of the social media users surveyed said they were regular users of Facebook, Twitter and LinkedIn, logging in to each at least one a month. Those users were most likely to be under 50, university educated and live in a high-income household with a child under 12 in the home.

Morrison said social media membership will likely continue to grow as users who previously held out feel obligated to finally join in.

“We’re getting into now that cultural tipping point where it’s no longer really that choice of, ‘I don’t need it, I’m not going to use it,’ but rather, ‘I’m being left out of things now because so many people use it and they assume everyone has it.'”

On the other hand, there will always be resisters who refuse to sign on to what they deem to be a fad.

Maybe it’s not for you “if you are very satisfied with the amount of interaction you have with your friends and family and the people you lost touch with you’re happy to not be in touch with them anymore. Or you’re not looking for a job, you’re happy with where you are,” Morrison said.

“If you’re very satisfied with your life it’s quite possible you do not need whatever new technological gizmo that comes your way.”

The survey results are considered accurate within 1.5 percentage points 19 times out of 20.