What students are talking about today (January 30th) 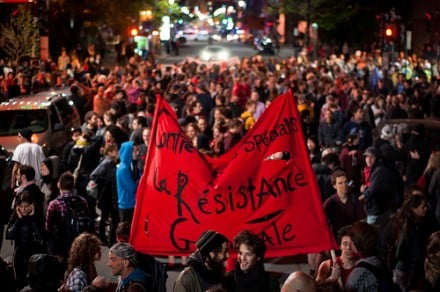 1. Almost a year after the start of anti-tuition marches that shut down many Quebec university programs and later toppled the Jean Charest government, the new Parti Quebecois government says zero tuition is not currently feasible, surely disappointing many of the activists who got the PQ elected. Meanwhile, François Legault, leader of the Coalition Avenir Québec, is trying to make the anti-tuition supporters heads explode by proposing a two-tier system of tuition in which the provinces “top four” universities—Montreal, McGill, Laval and Sherbrooke—would set their own tuition fees, while the remaining 14 would become much more affordable teaching-focused universities. The idea of two-tier education with research and teaching universities isn’t new and it isn’t very popular in Canada, but there’s a reason it never goes away—it could potentially work. Read more on Legault’s plan here.

2. CBC News in St. John’s, Nfld. has done an undercover investigation into an advertisement making the rounds at Memorial University seeking “hostesses” to give businessmen “massages” for Sherry’s Sugar Shack. In an e-mail to a fake account set up by the diabolical CBC, the business’ owner wrote back: “The business is an adult massage parlour. It is NOT a brothel” and “you would be massaging wealthy older men & they, if they wished would massage you. This is called a ‘nude reverse.’ Some men prefer lingerie, others like to look at nude women. There is no sex involved.” As sleazy as it is to recruit for erotic massages on campus, it’s certainly nothing new. Advertisements like this pop up on campuses in Toronto all the time.

3. Muslim students at the South Alberta Institute of Technology are speaking out about “a broken stool, splashing water, and disfunctional taps” in the prayer room on campus. Prior to prayer, Muslims clean their hands, arms, face and feet, which is why a functioning washroom is needed, according to The Weal. Student Asif Saeed suggested the washroom be cleaned more often too considering it gets used more often than most. Meanwhile, students at Ryerson University are celebrating the opening of a more spacious multi-faith space funded by the Students’ Union.

4. First-year American students in 2012 were drinking beer at less than half the rate of first-year students in 1982, according to the 2012 Freshman Norms report conducted by UCLA. Just 33 percent of college freshman reported drinking beer in 2012, down from 73.7 per cent in 1982.

5. Also in the U.S., Taco Bell has pulled an advertisement that made fun of people who bring vegetables to football-watching parties after pressure from the Center for Science in the Public Interest, reports Eater. Of course that just makes you want to see it more, doesn’t it? Here it is.